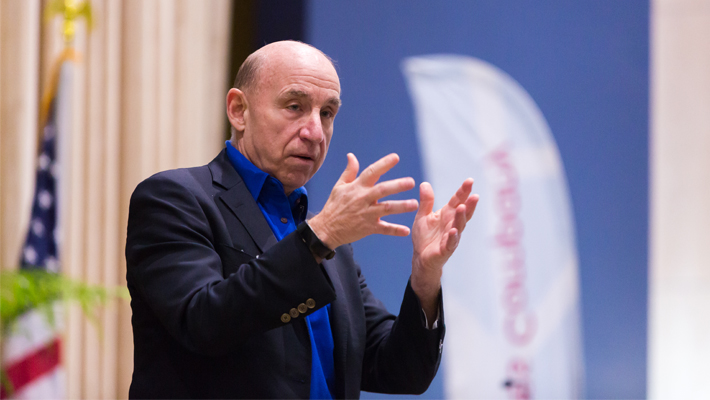 Glenn Rufrano’s foray into the business world began by taking a risk. As a new college grad with a computer analytics degree, Rufrano couldn’t find a job in his chosen field, so he accepted one as a property appraiser on Long Island.

“I didn’t even know what a real estate appraiser was,” he said. “I had nothing better to do.” A year later, he took another risk, moving to Miami to open an additional office.

Time and again, during a career in real estate spanning more than 40 years, Rufrano has repeatedly turned risks into rewards by taking charge of troubled companies and turning them around. Rufrano (MS ’74) returned to his alma mater on March 6, 2019 to share lessons learned with students as part of the FIU Business CEO Speaker Series. Supported by Wertheim Lecture Series Endowment funds, the talks put business leaders in front of students for education, inspiration and real-world advice.

“You have to take a risk, embrace it,” he told the crowd at the Student Academic Success Center Auditorium. “You might win or lose, but if you feel good about yourself, you should take that risk.”

Rufrano counseled students to ask themselves what their talent is and where their passion lies before deciding what to do or where to be. For his part, he returned to New York in the late 1970s amid the real-estate downturn and, in 1983, co-founded O’Connor Group (now called O’Connor Capital Partners). By 1998, the firm had 750 employees and $7 billion in assets under management.

His next risk adventure: taking on his first stint as CEO of a public company, New Plan Excel Realty Trust, in 2000. After Rufrano transformed it into one of the nation’s largest public real estate companies, it was acquired by Australian REIT Centro Properties. A few months later, Centro Properties disclosed that it was in default on $5 billion in debt.

“When you’re a public company and you put out an announcement like that, it’s bad,” he said. The firm swayed Rufrano to move to Melbourne and take the helm in 2008. “I knew about real estate in the States, but I didn’t know anything about real estate in Australia,” Rufrano said. Still, despite the firm’s $7 billion of debt with 23 lenders, Rufrano avoided bankruptcy by establishing a three-year plan with the lenders and restructuring the debt.

“What’s the most important thing about going into a turnaround?” he asked. “Knowing that you didn’t cause the problem.”

His biggest risk to date, Rufrano told the students, came in 2010, when he returned to the U.S. to head Cushman & Wakefield, a company that had been suffering substantial losses. Once again, the turnaround specialist steered the company in a favorable direction, laying the groundwork for its sale to DTZ in 2015.

Rufrano’s expertise was called upon again in 2015, after American Realty Capital Properties was rocked by revelations of accounting irregularities. He remains with the company today and, renamed VEREIT, it is on the right track.

“At the root of this company, there are good assets and good people,” he said. “People are really important. We have to take care of our constituents – shareholders, tenants, employees. To do so, you have to be transparent, and consistent.”

Before Rufrano’s conversation, three FIU Business students – analytics major Gabriel Lopez, and finance majors Giuseppe Lariccia and Dennis Collazo –  presented equity research analyses focused on market trends and geographical outlook for REITs, a specialty of VEREIT. Rufrano called the presentations “detailed and thoughtful, showing a lot of effort.” He noted that while there were some errors in assumptions, VEREIT was “a very difficult company to understand.”

During a Q&A with Dean Joanne Li, Rufrano talked about the impact of political and geo-political situations, noting that the REIT market went up both when interest rates climbed last year and when Brexit occurred. He cautioned against investing in real estate for tax reasons.