The South Florida National Society of Hispanic MBAs (NSHMBA) held a “Just-in-Time Hiring Event” on March 2, 2007, at Florida International University’s (FIU) Modesto A. Maidique Campus. By all measures, it was an excellent venue both for those seeking jobs and those seeking to hire.

The fair was open to all AACSB International-accredited business schools affiliated with a State of Florida NSHMBA Chapter. MBA students from other universities in South Florida, most particularly the University of Miami, also attended. Director of the college’s Career Management Services Barry Shiflett and Elsie Florido, coordinator, handled the recruiting of companies and all logistics related to the event.

“Many of the companies that participated have not recruited at our university before,” said José de la Torre, dean of the Chapman Graduate School. “Companies also had the option to interview pre-selected candidates drawn from an event résumé book that was sent to them several weeks before the event, and more than half requested interview booths.”

A large percentage of the companies responded to a post-fair survey and unanimously described the event as well-planned; they also said that they would attend a similar gathering in the future. They noted that they were able to see a significant number of prospects that day—between twenty and 100 students—and many of them scheduled interviews at their company offices.

Among their overall impressions, which echoed de la Torre’s assessment that the fair was “a great success”:

Fair attracts companies from across many industries.

In addition to the fair itself, Procter & Gamble and Fannie Mae presented information sessions to graduate business students on March 1, 2007.

The total student attendance was 191, representing 138 current students, 24 alumni, and 28 students from other universities.

NSHMBA’s mission is to improve society by fostering Hispanic leadership through graduate management education and professional development. Executive Dean Joyce J. Elam was named to NSHMBA’s Corporate Advisory Board in 2002. 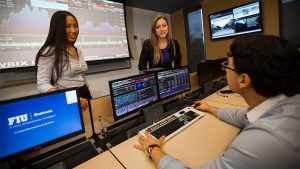