True or false: a company’s most valuable resource is its people.

Though the answer is “true,” many have an erroneously negative impression of the functional department—human resources (HR)—that manages personnel and more, according to Juan I. Sanchez, professor and Knight Ridder Byron Harless Eminent Scholar Chair in Management, Department of Management and International Business in the College of Business Administration.

“People see the HR function occupying the bottom of organizations,” he said, noting that employees regard HR professionals as police who intervene in conflicts; counselors who help employees whose problems are interfering with their performance; entertainers with the budget to organize social events complete with invitations, food, and balloons; and bureaucrats who handle paperwork.

Sanchez argues that taking this limited—and distorted—view of HR management causes companies to overlook the vital contributions that HR managers can make to improving the bottom line. That role is especially true now when intangible factors, such as talent and creativity, have replaced tangible ones, such as infrastructure, as most important for success.

Consider AT&T as an example of a company once competing effectively based on tangible assets and Southwest Airlines embodying the notion of drawing on intangible ones.

“Twenty-five years ago, if you wanted to make a long distance call, AT&T owned the infrastructure,” he said. “After a series of technology breakthroughs, such as fiber optics and most importantly, wireless communication, callers no longer need to rely on the AT&T infrastructure.”

Contrast that model with Southwest Airlines, which factors in personality and talent, hiring people compatible with the airline’s image of reliability, no frills, and informality as a way to compete.

“To support that strategy, you need the kind of person who will be flexible, informal, and who doesn’t take himself or herself too seriously,” he said.

With a shift to focusing on intangibles, HR needs to approach its role differently.

Organizations must turn to HR to identify, hire, and train the right people in this world of intangible capital. As a result, HR can play a role in enhancing profitability. However, for HR to fulfill its valuable place as a strategic partner, its managers need to redefine and reposition themselves.

“First, they need to understand the entire business very well—what their organization does and how it does it,” Sanchez said. “Then they can pinpoint actions that fit the strategy so they can motivate people to behave in ways that are consistent with the company’s strategy.” 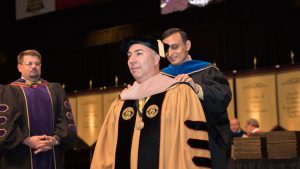