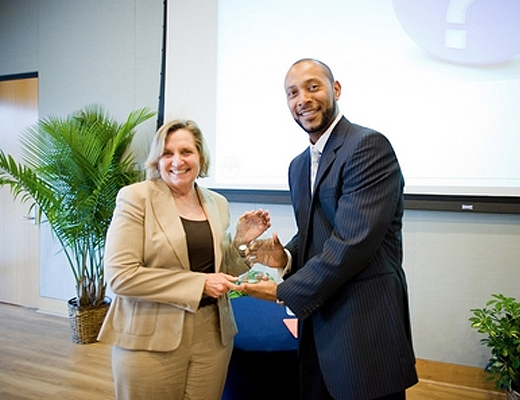 Perhaps no industry is as regulated as the wines and spirits business, with myriad federal and state-by-state compliances. That’s part of the challenge in achieving brand success, explained Julious Grant, senior vice president and national sales distributor for Bacardi U.S.A. Inc.

Speaking on “Bacardi: Our Route to Consumers in the United States of America,” Grant described for an audience of 90 the marketing paths Bacardi has followed to become the largest privately held spirits company in the world with more than 200 labels.

Grant’s appearance at the College of Business Administration at Florida International University (FIU) was part of the Herbert A. Wertheim Lecture Series. This program has brought distinguished speakers and experts in business leadership and entrepreneurship to FIU since 1993.

Among those in attendance were faculty, students and staff from the business school as well as members of the Bacardi family who helped secure Grant’s visit to FIU.

“Mr. Grant’s presentation was amazing,” said Melissa Izquierdo (BBA ’10), coordinator, corporate and community relations for the college. “Nothing beats hearing from an industry leader about their specific challenges and the innovative ways they have achieved distribution success.”

“Having a speaker the caliber of Julious Grant was certainly an enriching opportunity,” said FIU Vice Provost Irma Becerra-Fernandez (PhD ’94), who recommended Grant for the Wertheim Series. “His keen ability to capture audience attention coupled with his sales and distribution insight made for a fascinating presentation.”

Stefanie Anding (EMBA ’10), director of business development for the college, added that hearing about Bacardi family values was fascinating.

“He also explained how social currency is critical to individuals and to companies,” she said. “He told us how the company’s sponsorship of events like the Black Eyed Peas tour adds to their social currency.”

Grant joined Bacardi U.S.A. in 2007. He has more than 21 years’ experience in the wines and spirits industry.

While on campus, he toured the College of Business Complex.

“He was quite impressed, especially with the State Farm Financial Literacy Lab,” said Anding, who accompanied him on the tour.