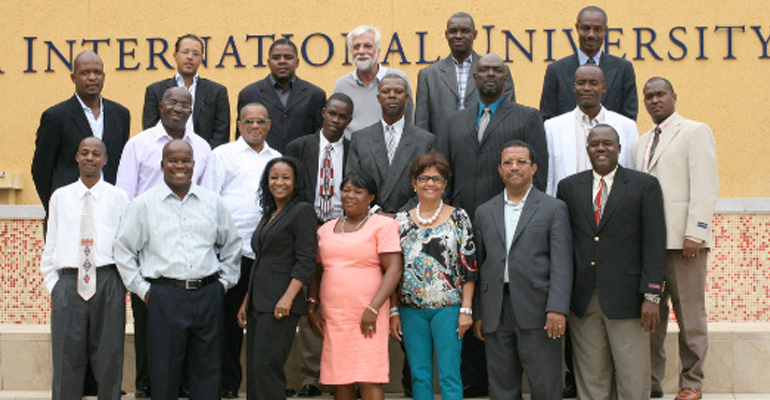 As Haiti marked the second anniversary of its devastating earthquake of January 12, 2010, one of the most significant signs of economic growth is a strong entrepreneurial spirit, very much a part of that country.

The “2011 Digicel Entrepreneur of the Year” from telecommunications operator Digicel fosters that success. As part of the program, for the second year, a three-day Haiti-CEO Retreat took place at Florida International University (FIU).

Twenty-four Haitian CEOs and entrepreneurs, selected as finalists from a group of 245 applicants, traveled to FIU in November 2011 for the event conducted by the Office of Executive and Professional Education (EPE), part of the College of Business Administration.

“The program’s central theme focused on how to build a giant company with no capital,” said EPE’s assistant director Rosangel Quintero (PMBA ’10). “The agenda was packed with instruction, motivation and recognition, and a chance for participants to share their stories.”

“This was, by far, the best executive program I have been involved with and the knowledge acquired is already being applied in my company,” said Valentin Abe, an aquaculture businessman who subsequently was named the 2011 Digicel Entrepreneur for his unique business model of selling fish-raising kits to Haitian farmers then buying back the fish, an effort strengthening the local economy.

“Entrepreneurship is a very lonely vocation,” said Dileep Rao, who served as faculty director and instructor. “These Haitians entrepreneurs are not as privileged as business developers in Silicon Valley but they are determined, talented and hard working. It’s wonderful that Digicel recognizes and helps them.”

Keynote speaker Dumas M. Simeus, a Haitian-born entrepreneur who owns and operates Simeus Foods International, one of the world’s largest processors of frozen foods, shared his story from poverty to success.

“I thank Digicel and FIU and I dearly hope they continue to assist Haitian entrepreneurs and entrepreneurs from all over the world,” Abe said.