In its first showing at the prestigious Rotman Interactive Trading Competition, a team from Florida International University’s (FIU) College of Business Administration won high praise, including a third-place finish in one of the trading contests.

The invitation-only competition, held at the University of Toronto’s Rotman School of Management, attracts some of the world’s most astute student traders. Only 50 schools are invited to the annual event, which recently marked its ninth year. FIU was the only Florida school to receive an invitation.

Using the Rotman trading simulation programs, teams participate in a series of trading competitions set forth in fixed scenarios. Each of the six contests is ranked individually, and then each team receives a total score.

One of the highlights for FIU was finishing third out of 50 teams in Quantitative Outcry, a contest that simulates a live floor trading scenario.

“That feeling was unbelievable,” said Shaun Hoyes, associate director of the college’s State Farm Financial Literacy Lab, who led the team. “A lot of people there weren’t familiar with our school. After that, they knew who we were and what FIU is all about.”

With real-life employers watching the participants and actively recruiting, Rotman provided an opportunity for FIU to make a statement in the world of business education.

“This competition allowed FIU to face off against top echelon of business students,” said Helen Simon, faculty advisor and the lab’s director. “It was a great opportunity to gain exposure, not just for our students, but also for FIU.”

The FIU team finished 36th out of 50 overall, a respectable outing for first-timers and ahead of a handful of top-level participants including Columbia University and the United States Military Academy (West Point).

“This was a great showing,” Simon said. “It demonstrates the quality of our students, and the strength of our program.” 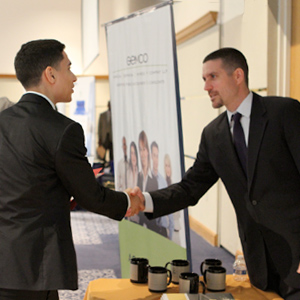