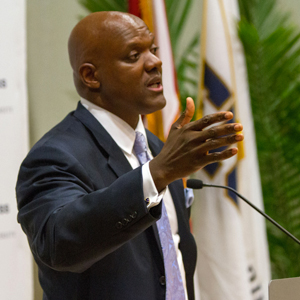 This dynamic speaker — founder, managing partner and CIO of Mansa Capital, a healthcare private equity investment firm– was part of the Wertheim Lecture Series at the College of Business at Florida International University (FIU).

During his presentation on September 18, 2013, King-Shaw told the audience of 150 that his next choice was FIU — for a master’s degree in Health Services Administration and a Master of International Business at the Chapman Graduate School of Business – because he found FIU to be “young, brash, daring and inventive.”

King-Shaw served as Secretary of the Florida Agency for Health Care Administration, heading the agency in 1998. He next served as COO and Deputy Administrator of the Centers for Medicare and Medicaid Services and was also senior advisor to the Secretary of the Treasury. President Bush named King-Shaw to the President’s New Freedom Commission on Mental Health.

“Probably the most momentous decision I had to make after years in public service was, ‘What do you do with it all?’” he said. “I decided to leverage what I knew to pick winning health care companies.”

He opened Mansa in 2003 but has remained active in public service, including an appointment to the Obama Administration’s Medicare Program Advisory and Oversight Commission.

King-Shaw, who was welcomed by Dean David R. Klock and President Mark Rosenberg, told students that they have been smart to choose FIU for many reasons, including graduating with less debt.

“The entrepreneurs who I met today in the business school will need partners one day,” he said, “and I want to be there with the capital, the know-how and support to help them create the next solutions to the health care crisis.

“I have no doubt that those solutions will come from here,” he concluded. “The rest of the country will look more and more like Miami. If there’s a business model that works in Miami, it can be replicated nationality.”