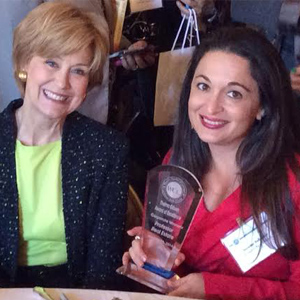 Jonathan Milian, assistant professor, presented his research paper “Overreacting to a History of Underreaction?” at the annual meeting of the American Finance Association on January 5, 2014 in Philadelphia.

Monica Chiarini Tremblay, associate professor, served as prototype demo chair for the 23rd Workshop on Information Technology and Systems (WITS) and as session chair for the healthcare track at the International Conference on Information Systems (ICIS). Both events were held in Milan, Italy in December, 2013.

Suzanne Hollander, visiting instructor, received the 2014 Thelma Gibson Award of Excellence in recognition of her contribution of real estate education to the community. The award is given by the Women’s Chamber of Commerce of Miami-Dade County at the Biltmore Hotel on January 23, 2014.