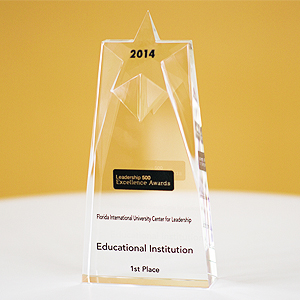 Leadership Excellence, a publication of HR.com, has named Florida International University’s Center for Leadership as the recipient of their 2014 Leadership 500 Excellence Award, ranking the center’s programs as #1 in the educational institution category. Awardees were announced last week at the 2014 Global Leadership Excellence Forum in Vail, Colorado, which recognized exceptional leadership development programs in various categories.

The Center for Leadership is a part of the nationally ranked College of Business at FIU and was established by Dr. Modesto A. Maidique during his tenure as the university’s fourth president. Offering executive leadership programs for company executives at the director level or higher, the Center’s programs are grounded in empirical research and consistently informed by practitioners of leadership.

For the past 30 years, Leadership Excellence has identified and recognized the Top 500 leadership organizations and their strategies and solutions in their annual ranking.

“Leadership is an art that requires constant practice and focus to master. The firms recognized in the Leadership 500 Excellence Awards program significantly help firms grow and develop their leaders through some of the most impactful programs we have ever seen,” stated Debbie McGrath, CEO of HR.com, the largest global social networking and resource site for HR professionals.

HR.com heavily weighted rankings based on alumni feedback regarding the impact of program content.

The 2014 rankings are the first listings since HR.com took over the publication of Leadership Excellence. With revamped methodology for ranking leadership development providers, HR.com heavily weighted rankings based on alumni feedback regarding the impact of program content, and engaging social media to garner a more objective rating of each institution. This year’s Top 500 award winners have been published in the April issue of Leadership Excellence Essentials.

“To have this external validation of the Center’s work is truly delightful, and we hope this award will help us to further accelerate the building of better leaders for better organizations and a better world,” Mayra Beers, Ph.D., Director for the Center and a Knight Research Fellow. “From the beginning, our program alumni have been our greatest allies and supporters. This honor further recognizes the Center’s commitment to advancing the field of leadership knowledge and developing best practices for organizational leaders.”

The published award winners’ lists feature over 1200 recipients, with the top ten in each category recognized for their exceptional programs and leadership initiatives. Awards to leadership providers were also given in categories such as U.S. companies, government/military, and international companies.