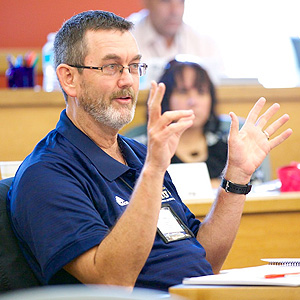 Principles of the business world are of significant value to school principals. Now, the fifth class of principals from the Miami-Dade County Public Schools is benefiting from that multidisciplinary idea, the basis of the Principals Leadership Development Program from the Center for Leadership of the College of Business at Florida International University (FIU).

“A principal is the CEO of their organization and we empower Miami-Dade County principals to become more effective leaders and change agents,” said Mayra Beers, director for the center and a Knight Research Fellow. “A generous grant from the John S. and James L. Knight Foundation provided for the development of this program and underwrites a significant portion of its delivery.”

Launched in 2010, the Principals Leadership Development Program welcomed its fifth class this June. The initial five days of the program were held June 9-14, 2014. The cohort will then complete the program in the spring of 2015, bringing the number of program alumni to 149 principals.

“After 26 years in education, today I feel fired up,” said Derick R. McKoy Sr., principal of Eneida Massas Hartner Elementary School, at the end of June session. “I have so many notes about how I’m going to craft my leadership plan moving forward. I learned techniques from all these educational minds, research-based information about what makes for good leadership.”

McKoy said one of the biggest insights he gained is to “trust, trust, trust” in his support system.

“Everybody has a particular strength. When I allow others to impact children in such a way that the successes are materialized, it’s a win-win for everybody including the people I’m leading,” he said.

Ana Gutierrez, principal of Auburndale Elementary, added that the Principals Leadership Development Program helped her achieve balance between her professional and personal lives.

“I suspected I needed to work on being a better delegator but this week confirmed it,” she said. “When I give a responsibility to another team member, I’m not going in 20 different directions. More importantly, when I’m mentoring and empowering others to take a leadership role, I’m building a strong team which benefits the entire school.”