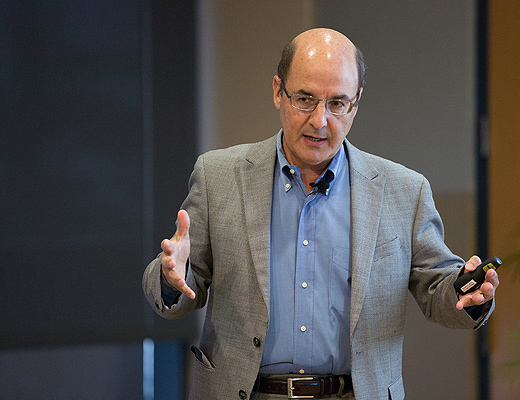 What does it take to run the world’s largest wholesale distributor of swimming pool and related products? Manuel J. Perez de la Mesa, Pool Corp. president and CEO, acknowledges the importance of finance, selling and operations skills. Still, said the FIU College of Business alumnus, communications and building a strong team are the true keys to leadership.

“When you finish and graduate, you will have learned less than 10 percent of what you will learn (in your career),” Perez de la Mesa told a group of students, alumni and professors at the Herbert A. Wertheim Lecture, held Sept. 29. “There will be hard skills you learn, but in business – and in life – it is more about the soft-skills side.”

Perez de la Mesa’s Florida International University degree, earned in 1977, laid the foundation for a career path that brought him to the helm of a public company with more than $2 billion in sales. Pool Corp., which supplies more than 100,000 customers, primarily contractors and pool supply retailers, has more than 330 locations in the United States, Canada and Europe, plus a growing presence in Mexico and Colombia.

Like many in the FIU audience, Perez de la Mesa comes from an immigrant family, which came to the United States in 1961. Perez de la Mesa worked his way through college. His advice to those just starting the journey: pursue opportunities, even those considered out of one’s grasp.

“Life is an adventure,” he said. “Always seek to push boundaries and limits. Raise your hand and pursue those opportunities.”

Perez de la Mesa did exactly that. Shortly out of school, he told his audience, he applied for a financial analyst position advertised in The Wall Street Journal. He beat out dozens of other applicants – including a Wharton School graduate.

The lesson: “Apply – you never know if you will get it,” he said. You might not get it, but if you do, you will learn a lot and grow personally and professionally.”

Perez de la Mesa explained how his company differentiates itself from the competition. Along with selling products, Pool Corp. helps its contractors, retailers and landscape clients be successful by providing expertise in everything from creating websites to building sales leads.

To create that kind of value-added service in a highly competitive market, Perez de la Mesa said, you must hire the right people. “The business is very local – we are only as good as our management and team in that local market.” To that end, Pool Corp., puts robust resources toward developing its own talent.

Perez de la Mesa said that his experience at FIU ushered him into the business world while he was learning in class. “I was going to school at night,” he said, noting that his professors, most of whom were adjuncts, brought along a tremendous amount of business experience. “They not only taught the subject matter, but gave live examples. These individuals helped me connect the dots.”