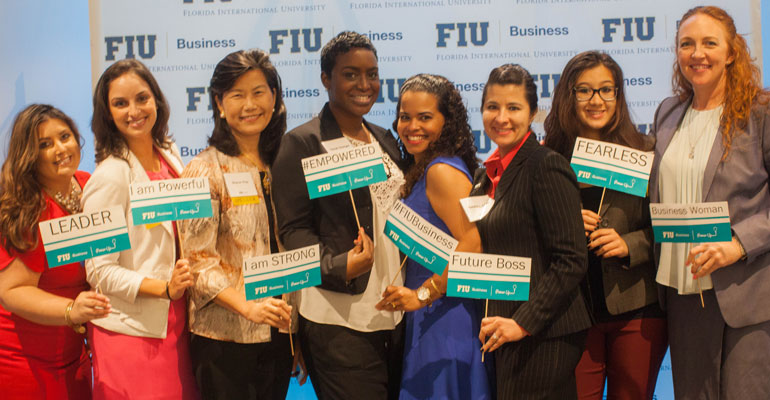 The challenges women face, experiences of thriving despite many obstacles, and tips for success took center stage at FIU’s inaugural Power Up summit, which brought together women leaders from South Florida.

“Success is completion, deletion, creation,” author Susan Ford Collins told participants. “It’s knowing when a method isn’t producing results and abandoning it if necessary… and thinking of the next great idea.”

The May 27 event included a number of powerful spotlight speakers, among them entrepreneurs Misha Kuryla-Gomez of Misha’s Cupcakes and Pilar Guzman-Zavala of Half Moon Empanadas, and top-level women executives from Ryder System, Baptist Outpatient Services, and the Miami Dolphins.

Building a successful business is rarely easy and the speakers showed that passion can be derived from many places.

The creation and launch of Half Moon Empanadas wasn’t an easy task for Pilar Guzman-Zavala and her husband Juan Zavala, who opened the first store in 2008. As the business grew, so did the challenges, Guzman-Zavala said.

“There was a time when I couldn’t get a bank loan despite having a signed contract for a store at Miami International Airport,” said Guzman-Zavala. “You have to rationalize your failures and your fears – ask why, what the worst case scenario might be – so you won’t go crazy.”

For Misha Kuryla-Gomez (MIB ’04), founder of Misha’s Cupcakes, the financial need to get a job and wanting to be a stay-at-home mom were the impetus for becoming an entrepreneur. She started the business in 2005 from her kitchen and today owns five bakeries in South Florida.

“These women are down to earth, honest and say what they feel,” said conference attendee Alexia Gonzalez, founder of networking and financial education group {My Man is Not} My Plan. “Misha got up at 4 a.m. to bake cupcakes in her kitchen for seven years; she wasn’t sleeping in. That’s reality and people need to hear that, they need to see how important it is to be passionate.”

The consensus from Power Up speakers is that successful women must take it upon themselves to stand out across divisions, build relationships throughout the company, and ask the right questions to get the skills needed to reach top-level positions.

“When my career at the Dolphins began, my team consisted of one employee. My challenge was to build an entire team,” said Howard. “You have to take risks, do things outside your comfort zone, have no fears, and believe in yourself.” Still a long way to go.

College of Business professor Seema Pissaris remarked that while women have made many advances, the areas of progress have been uneven.  She noted for example that women in the US earn 77 cents for every dollar earned by men. In Florida that increases to 84 cents and drops to 60 cents among Hispanic women.

“Today it’s about leaning in, looking up and leaping upward,” said Pissaris, who teaches courses in Leadership, Strategy, and Entrepreneurship.

Currently, only 21 women hold CEO jobs at the top 500 companies in the world, according to a survey released by the Rockefeller Foundation.

Cristina Gallo-Aquino, vice president and chief financial officer of Fleet Management Solutions (FMS) for Ryder System, pointed out that oftentimes men are given an opportunity based in their potential to perform while women may need to have to prove they can perform.

“If there’s an opening, women would have to prove they can do the job,” she added.

Power Up speakers noted that the road to success includes hurdles and obstacles that must be dealt with. Fear of failure? Acceptance is the key to overcoming it.

“You have to accept it and use it as a lesson,” said Patricia Rosello, chief executive officer at Baptist Outpatient Services. “Failure is the means to the end, it isn’t the end-all.”

In Their Own Words:

“You have to dream big and work very hard… I would live it again even if it was painful” – Pilar Guzman-Zavala, president of Half Moon Empanadas

“Look back at what you have accomplished, that will give you the strength to move forward” – Cristina Gallo-Aquino, vice president and chief financial officer of Fleet Management Solutions (FMS) for Ryder System

“When you have a good idea, do something about it” – Susan Ford Collins, creator of The Technology of Success 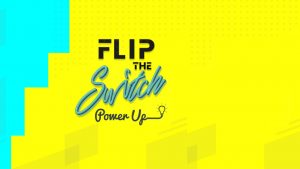 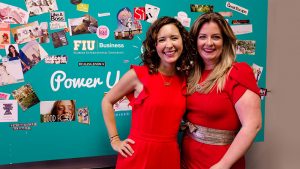