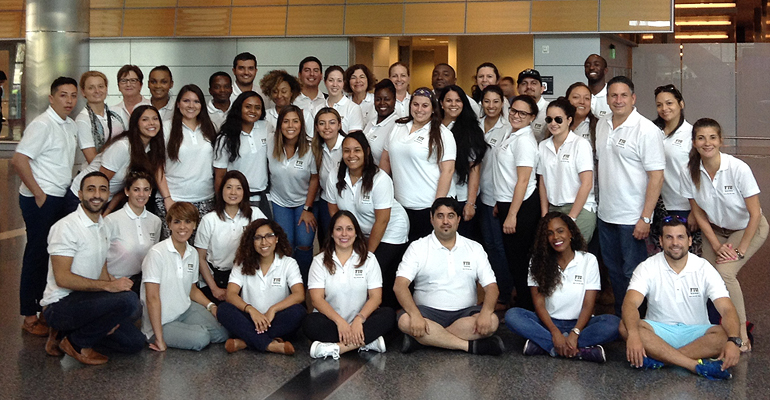 Doha (Qatar), Dubai and Abu Dhabi (United Arab Emirates) have the kind of generous healthcare funding other places – including the United States – can only envy. Seeing how this works first-hand was the opportunity of a lifetime for 40 Florida International University Healthcare MBA students and alumni.

Spending almost two weeks in August, the group, led by Professor Miriam Weismann, academic director of the College of Business’ Healthcare MBA program, visited hospitals, clinics, government health agencies and healthcare finance entities on the trip to the city of Doha in Qatar and the nearby cities of Dubai and Abu Dhabi, both in the United Arab Emirates.

Participants, who had to write a Health Policy Analysis Report, earned an Advanced Certificate in Global Healthcare Administration from the HCMBA and eight continuing education credits.

The trip gave the students a chance to experience an approach to health care that, because of the population and government policies of the monarchies, is in some ways, a controlled experiment.

“Qatar has one-eighth the population of Florida, unprecedented wealth and no poor people,” Weismann said. In both the UAE and Qatar, she explained, free health care is granted only to citizens, who make up just about 20 percent of the population. “If you are a citizen, they will pay for everything,” she said, noting that foreign workers must have jobs and employer-sponsored insurance — or leave. This structure ensures a system of universal health care for citizens.

The royal families in the UAE and in Qatar have both underwritten awe-inspiring state-of-the-art healthcare building projects (including a branch of the Cleveland Clinic in Abu Dhabi). Still, ensuring quality care and encouraging efficiencies remains a challenge, Weismann said. Even with the push to hire more U.S.-trained doctors, many residents travel abroad for medical procedures because the regulatory infrastructure and quality control metrics have yet to be implemented in these countries. There are also some gaps in the medical procedures available.

“Our students are all working professionals,” she said. “They know how hospitals should look, how quality assurance works, and how quality metrics work.” For students it was a rare chance to witness initiatives aimed at building a regulatory healthcare infrastructure from the ground up.

The hope: to attract tourists.

One goal behind all the construction is to become a medical tourism destination. What most impressed HCMBA student Ramy Mitwalli about Abu Dhabi is how leaders are assembling world-class medical teams to meet the challenge of implementing the new healthcare infrastructure.

“They are attracting people from all over the world, and managing to create a culture (with English as the common language) that fosters a sense of community,” said Mitwalli, who expects to graduate from the HCMBA program in December and plans on becoming a physician.

Yet, Mitwalli said, “Is it sustainable?” This was a concern generally expressed by the students as they witnessed the massive amount of dollars going into creating a healthcare infrastructure still in its infancy in both the UAE and Qatar.

Still, he noted, “What I think is one of the greatest things is that they are learning from other countries’ mistakes as they look to become a global powerhouse in best practices. They are implementing what is most suitable for them.”

Weismann said she was surprised that, as the two Middle Eastern countries move away from full government support for a universal health care system, that they were considering the implementation of a multiple third party payer system similar to the one in the U.S. “Why go down that road given the known problems of that system in the U.S.?” Weismann said.

Quality and Efficiencies are key concerns.

Money has not yet solved everything. Despite top-notch and JCI accredited facilities in Qatar and the UAE, nurses and other professionals are still not operating under the kind of regulatory requirements common in the West. And, noted Weismann and participants, a focus on making the most of every dollar and resource is lacking. Efficient delivery of healthcare is more of a goal than a reality.

Students saw that “without competition, you don’t have people worrying as much about economic efficiency” Weismann said. The monarchy controls the entire system through a series of government owned corporations. On the other hand, “they also saw the benefits of universal health care where everyone received some measure of coverage and no one was left to fall through the cracks.”

The trip is a 180-degree contrast to the program’s 2015 trip to Beijing and Guangzhou, which Weismann also led. On that trip, students learned how traditional Chinese medicine was integrated into modern healthcare practices, and how the country was coping with the sheer volume of people needing healthcare.

Maureen Lillis, who graduated with an MBA from FIU in May of this year and is a registered nurse and senior executive with a managed care plan, said the Qatar trip was life changing.

“There are many lessons we can learn about different health concerns as most issues impacting health are pandemic,” she said. What will stay with her is the warmth of the people and a deeper understanding of one Middle Eastern Arabian culture. Still, she also came away with a contrasting view of how healthcare might be approached.

“All locales stressed the need to change their current economic model and dependence on oil for future growth due to declining reserves and prices,” she said. “Healthcare is a large business sector being targeted. They are going about it in a very strategic and thoughtful manner.”