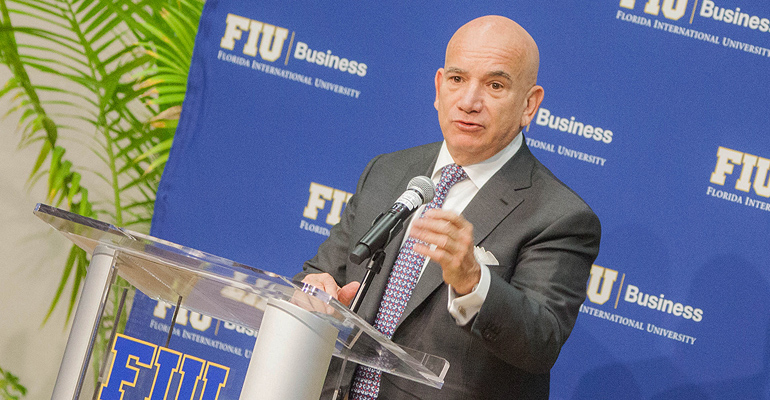 Carlos A. Migoya, CEO of Jackson Health System, has always been a numbers guy, but doesn’t lose sight of the people behind those numbers, their stories of challenges, failures and success. It’s those stories that have led him to his success as a person of transformation.

“Business is a people business,” Migoya said during the Herbert A. Wertheim Lecture Series at FIU’s College of Business. “Accounting puts together the numbers, the data but it’s the finance people who can read numbers, predict the future and understand the stories.”

Knowing little or nothing about an industry has never restrained Migoya (BBA ’74, MBA ’76) from taking on a challenge. He started as a bank teller at First National Bank of Florida in 1969 and led what is today Wells Fargo through the savings and loan crisis as well as various mergers and acquisitions. Years later, Migoya served as Miami’s city manager on a pro bono basis for 10 months.

“When I became city manager, I didn’t know anything about municipalities,” Migoya said. “What got me into Jackson Health System wasn’t about healthcare. It was about people.”

In each case, having the right people in the right places was key to overcome challenges posed by Jackson’s financial crisis and putting the business back on track.

When belt-tightening and cuts were needed, Migoya took action. He renegotiated contracts, reduced salaries and approved layoffs and personally explained to those affected why such action was being taken.

“You have to understand the finances and what to do, but you can’t lose focus that it’s all about people,” Migoya told the FIU community.

He drew up a plan to reduce expenses, establish best practices from the executive level to the operating rooms, and to transform Jackson’s image from a provider where patients would go “only if there was no other option, to the hospital of choice for everyone in Miami.” 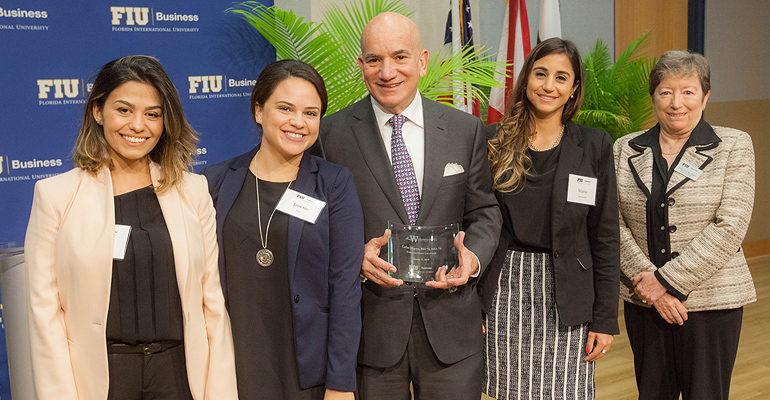 Planning for the future.

Migoya has ambitious plans for JHS that includes extensive rebuilding and renovations expected to take place through 2020. These include the expansion and renovation of Jackson Memorial Hospital; six new urgent care centers in Miami-Dade, including in North Miami, Miami Gardens, South Beach, Doral and Cutler Bay; and a new medical campus in Doral, Jackson West.

“The challenge now is how we continue to grow,” said Migoya. “Over the next 10 years we have to raise $100 million per year for improvements.”

The talk was attended by FIU Healthcare MBA students as well as staff members and Jackson professionals. In a question-and-answer session, Migoya stressed the importance of networking, urging students to practice building relationships, especially introducing themselves to someone they don’t know and starting a conversation.

“You can’t just start talking about a product,” Migoya said. “You have to find things in common, establish a link and build the relationship from there. That’s the kind of networking you need to know.”

As technology continues to impact the healthcare industry, one thing is certain: change. It may be sensors tracking patients’ vital statistics, or IBM’s Watson providing assistance in clinical diagnoses, or data providing new insights in personalized disease treatment, Migoya noted.

“Moving forward is about your ability to manage change,” he added. “You don’t need to be the smartest person in the business; you need to surround yourself with people who are smart.”