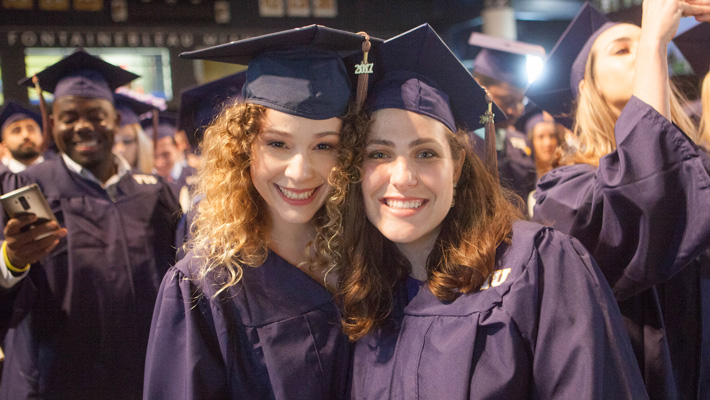 The College of Business had six exceptional students, including one team, named as Worlds Ahead graduates for Spring 2017. Each was applauded for their accomplishments by FIU President Mark B. Rosenberg at commencement ceremonies for College of Business students on April 29, 2017, commending them for overcoming challenges and demonstrating leadership.

Fayez Abboud was seven when his family moved to Miami from Brazil, where the young boy had to learn English and adjust to a new culture.

While in Lebanon for a summer break in 2006, Abboud and his family were in the middle of a war that broke out. The family was grateful to so many people who helped them get back to the U.S.

Abboud says he’ll always remember the importance of helping others. In high school, he spent many hours mentoring at a children’s home called His House.

He came to FIU to earn his business degree in finance and earned a 3.7 GPA.

Abboud began a partnership between his family’s import-export business and toymaker Hasbro. Since 2012, more than 1,200 toys have been donated to area children in need.

Abboud has been working part-time at Lynx Development Group in Coral Gables and has been offered a full-time position. He also hopes to enter FIU’s MBA program.

Determination and a twist of fate led Guy Jean Baptiste to pursue a career in information technology.

Baptiste, who came to South Florida in 2007 from Haiti, enrolled at FIU in 2013. Since many of the classes he needed were full, he selected a business telecommunications class which led him to pursue a management information systems degree.

Baptiste worked fulltime during college and expresses appreciation for professors Gladys Simpson and Nicole Wishart for their guidance and motivation.

After graduation, Baptiste will continue working at SunTrust Bank and hopes to eventually enroll in FIU’s Executive MBA program.

A president of a growing Christian school who’s also a busy husband and father made time to earn his MBA and achieve a 3.9 GPA.

In 2006 Carlos Leyrer became pastor at Divine Savior Academy, a Lutheran school, in Doral. He already had a bachelor’s degree and a Master of Divinity degree. The school was only two years old at that time and quickly made a name for itself.

Leyrer became president of the academy and expanded it to include a middle school and a high school, adding on more buildings and grew enrollment from 20 to 850 students. Leyrer and his staff are now working on opening a second campus in Delray Beach.

He and his wife, Julia, are also raising their three children, ages 7, 5 and 1.

Andrea Saladrigas and Carolina Chavez lifted FIU’s Sales Team into top national recognition at the International Collegiate Sales Competition in Orlando. Guided by their faculty mentors Nancy Rauseo and Rafael Soltero, they created a structure for Sales Society success that will serve the organization for years to come.

Saladrigas (president) and Chavez (executive vice president) led their executive board to a 30 percent increase in Sales Society membership. To help raise the skills of less experienced members, they challenged e-board members to initiate new programs and encouraged every member to build their sales expertise. They also modeled team success at the International Collegiate Sales Competition, where Chavez and Saladrigas placed #3 and #5, respectively, out of 137 individual competitors. The strong showing lifted FIU to a #2 ranking among 70 national schools – and #1 in the competitive Florida market.

The students also shine as individuals.

Chavez brought her strong administrative skills to establishing a new coaching program for FIU competitors, creating an evaluation structure and the means for mentors to work effectively with newcomers. In addition to a strong academic performance and co-curricular leadership, she’s currently training for an associate district manager position at ADP.

Saladrigas founded Master Honey, a unique program that places hives with low income women, teaches them business and hive maintenance skills, and buys the honey they produce. Master Honey won the BizVenture Competition hosted by the Hispanic Chamber of Commerce Foundation and was a finalist on the Philanthropy Shark Tank. After graduation, Saladrigas will devote herself full time to Master Honey.

During a trip across Asia after serving in the Israeli army, Ari Sernik volunteered with Sunflower Orphanage, a Cambodian group caring for HIV-positive children. Back in Florida, he arranged an auction of the children’s artwork, working with a professor from Broward College, where he studied before transferring to FIU. The effort raised $2,000 raised for the orphanage.

At FIU, Sernik learned from FIU President Emeritus Modesto A. Maidique how to bring community stakeholders together. Adjunct Professor Robert Hacker’s social entrepreneurship class provided tools to help reach his dreams. With FIU colleagues Sernik established Ten-Yad (“Give a Hand” in Hebrew), to help other children’s charities establish their brand and sell handicrafts. His idea won the “Shark Tank” themed pitch session before the FIU Foundation Board of Directors. He still continues to work with Sunflower.

Sernik has also been committed to the Nyah Project, which focuses on developing leaders from underserved communities in Miami.