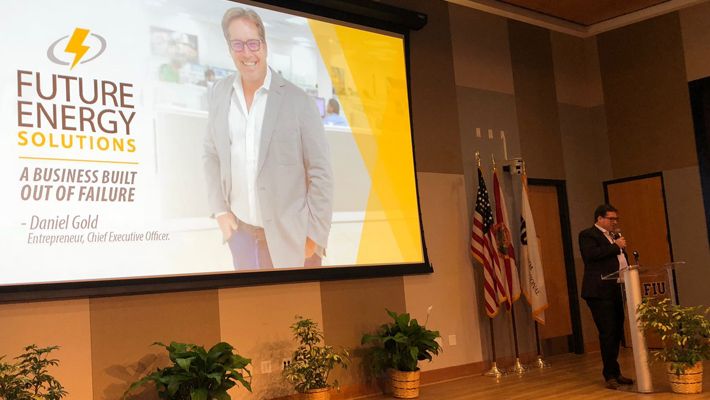 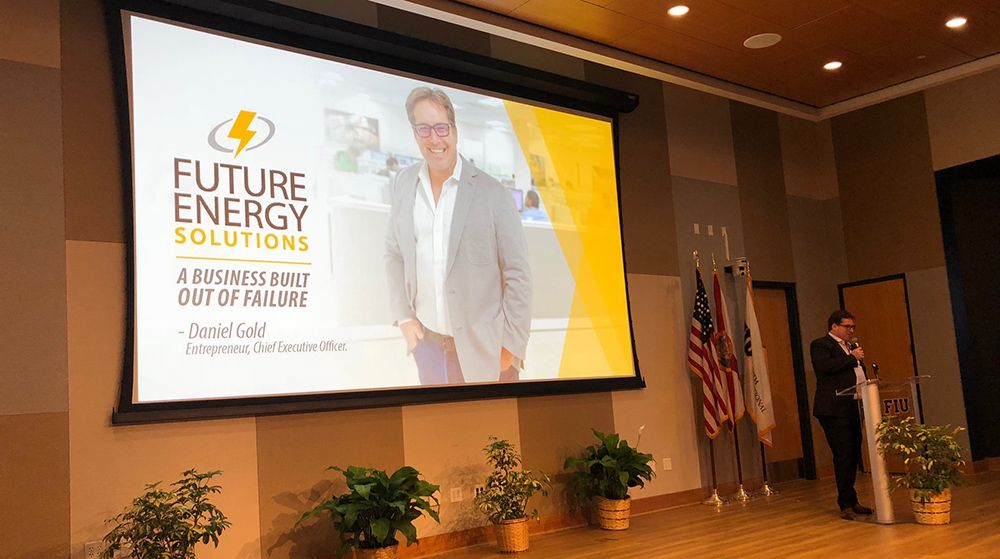 Daniel Gold hit on an idea that seemed so unlikely, so out-of-the-box, that he couldn’t believe it could be a profitable business.

He tossed it around, asking questions of himself, hoping to find a sign that it wouldn’t work. He spent eight months asking others to reject his idea.

Instead, they wanted to invest.

And so, in 2012, Gold moved forward with a new business concept for Future Energy Solutions (FES), a Fort Lauderdale-based lighting company he co-founded in 2009. Through its Gold Initiative Program, the company installs and maintains energy-efficient lighting systems for its clients at no capital cost, and derives its revenue from the energy savings each customer achieves with the more efficient FES-installed system. His idea, and his company’s execution, placed FES on the list of Inc. 5000’s fastest growing companies, and the company now has clients in over 40 states and Europe.

“A CEO is the ultimate influencer for our students,” said Joanne Li, dean of FIU Business. “It’s important for them to hear directly from someone who can inspire them and help them understand what they can do with their lives, and what goes into creating a path to success.” 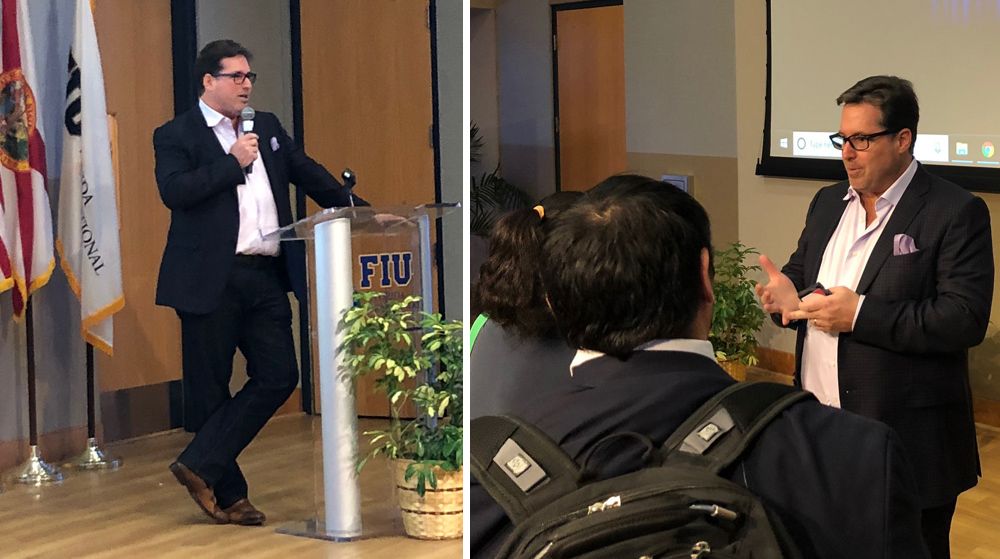 Gold did just that, offering students a candid look at lessons learned at many steps of his entrepreneurial journey.

“What the books don’t tell you,” he told a packed crowd at the Special Events Center on February 6, 2019, “is how life really works out for an entrepreneur. You have to not be afraid to fail, and you have to be a little crazy.”

His early not-too-successful stories included dropping out of school in his native England at 15 for a professional tennis career that didn’t work out. The next stop: working for his dad’s chemical business, at which he “failed miserably.” One day, he was taken to lunch and fired.

He worked a series of odd jobs, and found a passion—and talent—for sales. As a door-to-door salesman at the age of 19, “I wasn’t afraid to walk in front of people who were significantly older than me and make them buy things.”

He took a liking to one item he sold, ink toner cartridges, then only available in office supply stores. Why couldn’t they be sold in supermarkets, he thought, alongside stationary supplies? He convinced a supermarket chain to buy in, giving him a $100 million order and the start of his entrepreneurial success story.

He sold that business at the age of 37 and moved his family to South Florida, where his wife’s father was starting an electrical lighting supply business. He sat in hundreds of hours of meetings to learn a business he knew little about. He discovered there were inherent problems in traditional sales of energy-efficient lighting, costly equipment that wasn’t deemed essential to many of its potential customers and didn’t hold the promise for renewable revenues.

He set about trying to create a business model that would provide a steady stream of revenue and came upon an unlikely solution: to give his efficient lighting systems away for free, and provide installation and ongoing service at no cost as well, in exchange for a 15-year contract to receive revenue from the customer’s cost savings over the previous, inefficient lighting system.

“Not for a second did I think this was going to work,” he said. But he shopped the idea to law firms, banks and other potential investors. Instead of rejection, he got interest—and the Gold Initiative Program was born.

In the first year, he and his partner knocked on doors and got 24 contracts. By year 2, he had 147. FES now has over 1,500 customer sites under management. The company has won numerous business and governmental awards, and frequently partners with charitable causes including Habitat for Humanity, Ronald McDonald House, and Special Operations Wounded Warriors.

After his wide-ranging talk, Gold took questions and offered students a framework for thinking about entrepreneurship and spotting a potential business idea.

“You’ve actually run a business already: your own life,” he said, noting that all decisions a person makes – going to college, choosing a career path – employ a process that’s at the heart of business success.

“If you can think something through to its natural conclusion, and be honest, you will succeed,” he said, adding that success is often determined by “what you do with the mistakes that will come along.”

From the CEO’s Desk: