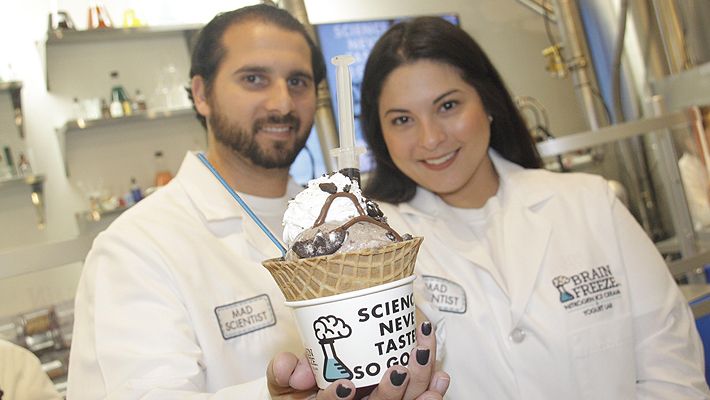 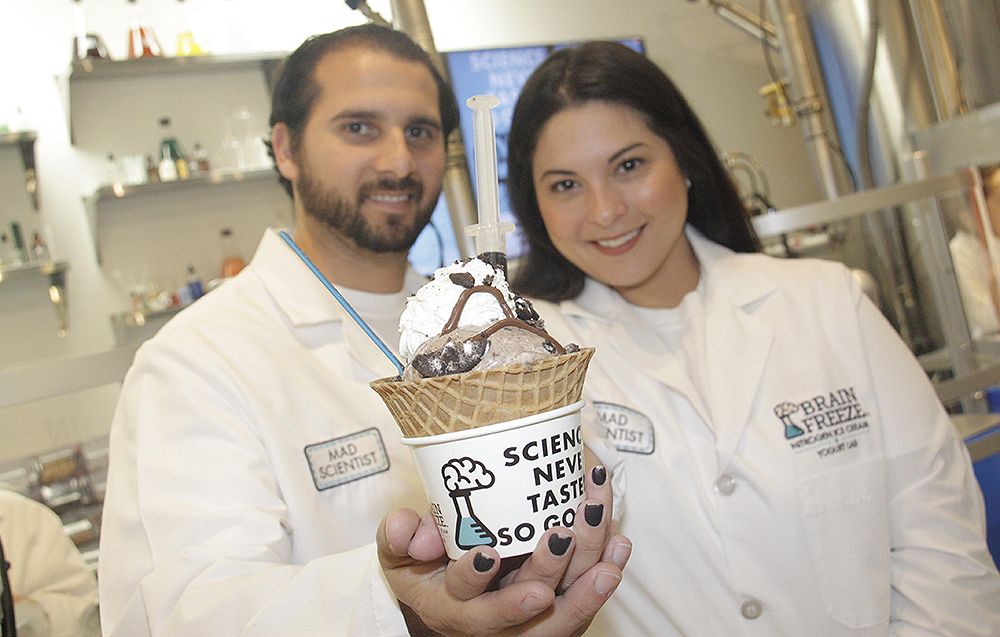 Yes, it’s true: We all do scream for ice cream. But at Brain Freeze Nitrogen Ice Cream & Yogurt Lab stores, we may also grow giddy with anticipation as we watch our customized ice cream treat created from scratch moments after entering the store.

Like regular ice cream, nitrogen ice cream starts with cream and sugar. But at these stores, customers select their own favorite toppings and flavors. The concoction is then blasted with liquid nitrogen at -320 degrees Fahrenheit, freezing the mix instantly and creating what Brain Freeze calls the “creamiest, smoothest ice cream imaginable.”

Brain Freeze is an enterprise developed by FIU Business alumni Gabriel Fraga and Christi Fraga. While vacationing in California, the Fragas, engaged community members and serial entrepreneurs, wandered into an ice cream store using liquid nitrogen and decided to further investigate the concept. Teaming up with two more partners, they opened a Doral ice cream store in April 2015, followed eight months later by a Kendall location.

It wasn’t like the Fragas needed something else to keep busy. The couple added the sweet venture to an accounting firm they own and manage, South Florida Small Business Solutions. Christi, who earned her bachelor’s in finance management and accounting in 2010 from FIU, is also a City of Doral councilwoman. Gabriel, a licensed plumber who followed in his stepfather’s footsteps, also owns and runs a plumbing business.

Sharing the heights and the challenges.

Fraga, who arrived from Cuba with his family at the age of 10, is the first in his family to go to college; he and Christi met at Miami-Dade College, which both attended before FIU. They now have a 3-year-old, Gabriel Alexander Fraga (whose favorite ice cream flavor is chocolate).

In addition to serving out of its two stores, Brain Freeze caters birthday parties and other special events. Customers can select from an array of flavors, toppings and custom combos, such as the Miami-themed Cubanito: cream cheese ice cream with guava chunks, Maria crackers and guava sauce.

A 2010 FIU Business BBA graduate, Fraga has been invited to talk about Brain Freeze with students at the FIU Chaplin School of Hospitality & Tourism Management. He tells would-be entrepreneurs to select one strong idea and follow it through, noting that execution is where many fall short.

“They don’t know how to start, and think they will come up with a different idea,” he said. And while Fraga was a businessman even before he earned a business degree, information gained in accounting and organizational processes at FIU has been key in streamlining operations in the companies he owns and runs, he said.

In the last several years, Fraga has become increasingly involved in the FIU Business Alumni Board, and serves as a mentor in its mentoring program. He’d like to help the college create a “network of opportunity” where alumni can call on one another as resources, for contacts and for business advice. It would give FIU students a leg up.

“You should be able to open up those doors,” he said, “and this is where you should start.”