Upon his arrival, he presented a lecture titled “Empowering Workers: The Privatization of Social Security in Chile” to the Latin American Forum, an invitation-only group of chief executive officers for Latin America—or their equivalents—of major multinational corporations.

“Dr. Piñera’s riveting talk to the Latin American Forum was incredibly well attended and very enthusiastically received,” said Natalia Echeverría, corporate relations manager for the Chapman Graduate School of Business, whose office coordinates the activities of the Forum. “What he had to say then generated a great deal of discussion among the Forum’s members.”

On the following day, he addressed students, faculty, and staff in the Executive MBA (EMBA) program. Ruben Cespedes, who is an executive at LAN Airlines and an EMBA student, was instrumental in arranging for LAN to co-sponsor Piñera’s visit by paying for his flight. Cespedes also coordinated with Echeverría to make the presentation on the Modesto A. Maidique Campus possible.

“It was a truly wonderful opportunity—and an honor— to be able to listen to a legend in his time, a man who single-handedly reformed Chile’s social security system and who has made a tremendous difference in the world” said Cathy M. Pareto (BA ’95), senior financial advisor and certified financial planner, Investor Solutions, Inc. and an EMBA student. “He also shed light onto our country’s struggle with social security.”

Among his many accomplishments, Piñera is responsible for the Social Security Act of 1980 that created a fully-funded pension system in Chile, for the Labor Code that regulated trade union activity and decentralized collective bargaining, and for the opening of the health sector to private provision. He is the founder and president of the International Center for Pension Reform, a non-profit initiative that promotes the reform of state pension systems along the lines of the Chilean model.

“I was able to speak with him briefly after his talk and have corresponded with him by e-mail,” Pareto said. “He has an open-door policy and thrives on sharing his experiences.”

“Dr. Piñera’s visit is an example of how the Chapman School partners successfully with its students and the corporate community, such as LAN Airlines, to sponsor internationally-acclaimed figures of great stature who have many valuable insights to share,” Echeverría said. 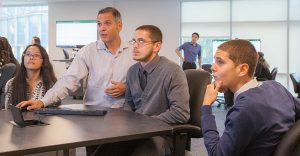