On Tuesday, Standard and Poor’s Credit Agency downgraded Greece’s credit rating to BB+, considered “speculative” or “junk”. The credit agency also downgraded Portugal’s government debt to A-, two levels from where it stood before. On Wednesday, S&P followed with yet another downgrade to Spain’s credit rating to AA from AA+ (higher risk investment grade).

While the initial news was released on Tuesday, the EUR/USD (Euro to Dollar ratio) dropped to its lowest level since May of 2009. This occurred as investors reacted by shifting out of risky assets such as Euro’s and equities. European, Asian, and US markets all lost from 1-2+% in their main indices on Tuesday, however rebounded on Wednesday and Thursday, almost erasing all losses. 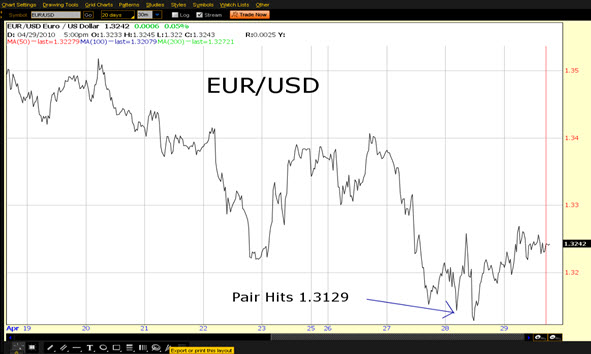 This week on the U.S. economic forefront, the FOMC meeting went as expected, with the Fed keeping interest rates near zero for an “extended period”. This is the 16th month in row the Fed has kept interest rates this low, as inflation has stayed quiet due to unemployment being still around 10%. Rates are expected to stay this low until 4Q10.

Weekly jobless claims were released on Thursday, nearly in line with estimates at 448,000 jobs lost versus 442,000 predicted.

Also this week, a large oil spill has taken place in the Gulf of Mexico. The spill, which was said to be triggered by an explosion on an offshore rig, was estimated to be pouring out 5,000 barrels of oil a day on Thursday (increasing from 1000 barrels a day earlier in the week). Many companies have been named and linked to the rig, from Transocean (RIG) to Halliburton (HAL), Cameron International (CAM), and BP. The White House decided BP would be responsible for the mess, and require them to pay for the cleanup. BP shares dropped over 12.5% this week on the news.