Fannie Mae and Freddie Mac to be De-listed

On Wednesday, June 16, Fannie Mae and Freddie Mac were “ordered…to voluntarily de-list”, according to the Wall Street Journal. The decision was pushed by Federal Housing Finance Agency Director Edward DeMarco. The two mortgage giants own 53% of the United States total outstanding residential mortgages, at the sum of nearly 6 trillion dollars, many of which have become delinquent. Some question the ability to keep the companies alive, as the U.S. taxpayers have already purchased 80% of each company, with the initial capital injection of 145 billion dollars. Since the government bought preferred shares with a 10% coupon, one major issue is the hurdle the companies will need to overcome before they begin to be profitable. Fannie Mae has yet to make a profit in the last eleven quarters, and Freddie Mac has only been capable of being slightly positive in two out of the last fifteen quarters. Along with this, in May of 2010 the two companies requested another 19.1 billion in funding from the US government. Analysts believe this will continue, and the government will need to spend at least half a trillion dollars to hold the companies above water in the coming years. 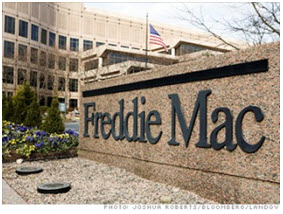 The stocks have recently been trading below the one dollar mark. When asked, Director Edward DeMarco referred to the minimum price rule on the New York Stock Exchange, which requires that share prices be above the one dollar mark after dipping below, within six months. The minimum price rule was temporarily lifted in 2009 for the two primarily government owned conglomerates. The news did not sit well with the market and the shares plunged. As Bose George told the Wall Street Journal “De-listing is the appropriate message: that these companies have no value and shouldn’t be traded as if they are real companies.”  Both companies should be delisted by July of this year, and traded primarily over the counter. 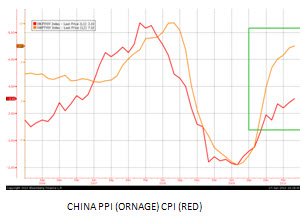 China’s CPI (consumer price index) and PPI (producer price index) numbers for May came in last week. The PPI had increased to 7.1% and the CPI had increased to 3.1% (for the month of May).  The CPI measures the changes in the cost of living for the consumer, while the PPI measures that change in prices received from the viewpoint of the producer.  The data seemed to indicate that Chinese producers have begun to raise their prices but distributors have not passed on the increase in costs to the consumer yet. 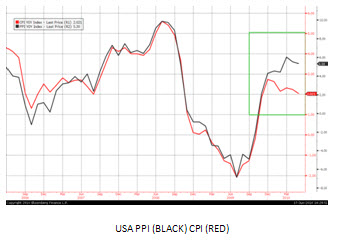 The United States also released the CPI and PPI numbers this week. CPI decreased from 2.2% to 2% and PPI decreased from 5.5% to 5.3%. Even so, the divergence between CPI and PPI numbers for May suggest the same as the numbers from China. There is a large deviation between the amount of money being received by the producer of goods and the amount being paid by the consumer for the goods. The data could suggest that either:

The first scenario seems more likely. Although the American economy has not fully recovered, business inventories and personal consumption have increased over the last few months. Even so, the job market is still severely depressed and most companies are still less profitable than they were at the end of 2006. Decreases in profitability, employment and disposable income have left American consumption severely depressed.  Both the United States and China rely heavily upon American consumption, which in the aggregate has decreased.  With less disposable income, the demand for goods and services should be down and savings for future consumption should be up (which it is in the aggregate). The second scenario seems less likely. Business inventories and consumption are up from their lows at the beginning of 2009. It is worth noting however, that the PPI has been steadily increasing as producers react to the market trends.

The European Central Bank’s primary decision-making body, the Governing Council, released its monthly publication at its meeting and decided to keep interest rates unchanged. Currently, the ECB’s marginal lending facility, the central bank’s interest rate ceiling, remains at 1.75% and its main refinancing rate at 1.0%. The ECB expects European growth to continue trending upwards but believes that the growth for the first two quarters of 2010 to be uneven. Many member states, however, still face economic challenges because of poor fiscal management.

While much of the attention has been focused on Greece, Spain, and Portugal, one of the largest economies in the region, Italy, faces many of the same issues that plague Greece. The Maastricht Treaty dictates that countries should maintain a debt-to-GDP ratio of no larger than 60%. For the last 16 years, the Italian Republic has failed to maintain a debt-to-GDP ratio below 100% and today it has ratio of 115%. This unmistakably violates the rules outlined by the ECB and investors are becoming wary of the southern European country’s ability to pay its obligations. The spread of Italian 10 year bonds to German bonds, the benchmark for interest rates in Europe, increased from May to June for about two weeks as Italian interest rates increased and German interest rates fell. Clearly, the market was expressing doubt of Italy’s fiscal situation relative to Germany because of a high debt burden an economy that has faced decline of 5% year of year.

Leaders from 27 member states met in Brussels on June 17, 2010 in order to discuss solutions to the fiscal crisis and strengthening the enforcement of the Maastricht Treaty. European leaders finalized and adopted the Europe 2020 strategy which lays out a strategy to “ensure fiscal sustainability and achieve budgetary targets without delay.” Despite this claim, the Europe 2020 campaign lacks any new changes to mitigating future sovereign debt crises in the region. As of recent, Europe has failed to maintain fiscal prudence by encouraging the bailing out of fiscally irresponsible countries like Greece. If Europe continues to tread along this path, they are risking an increase in moral hazard and a breakdown of fiscal discipline.

For the past two years, India’s economy has grown at a 5.8 annual pace, which is a remarkable performance in this time of recessions worldwide. However, this pace is not fast enough for the Indian Government, who aims to claim the title of fastest growing major economy which is now held by China. But the real problem here lies in another economic factor which has been overlooked –inflation.

In May, India’s annual inflation rose from 9.59% in April, to a peak of 10.16% which was driven by the rising fuel and food prices in the country. This is a phenomenal increase of 6.36% in annual inflation from last year’s value of 1.38% in May 2009. According to the data released by the Commerce Ministry, the price of food products has risen from 16.87% last month to 16.49% this month as shown in the Bloomberg graph below, whereas fuel saw an increase of 13.05%.

At present, this remains to be the main issue for the Indian Government. Inflation, led by the soaring food and fuel prices, took off last year due to the failed monsoon rains on which the crops such as rice and wheat relied upon. Moreover, there has been an increased demand for meat products and the like, which takes more grain to produce and has hence, added to this crisis.

In the recent decades, the Indian government has strived to develop upon the industrial sector, while mostly leaving out the agricultural policies unchanged. However, this time, they have tried to rein in the galloping prices by boosting the supply side by increasing the market’s food grain stocks themselves.  Nevertheless, the Government so far, has been unable to stem inflation as a whole, even though the central bank has increased interest rates and taken other steps to check the rising prices. It seems that the whole country is now relying on this year’s monsoon rains for a prosperous year ahead.