As of Thursday, June 03, 2010, the Dow Jones Industrial Average closed at 10,255 points. Although this is about a 1.2% increase for the week so far, looking at the price action over the year clears the picture for us a bit. Below is a daily candle graph of the Dow Jones Industrial Average from November of 2009 to June of 2010. The index is currently consolidating in the area of the highlighted box. If the area is an accumulation period, we should see the index reverse from the downward push in the coming days/weeks. If it is a period of distribution, then the index will continue its fall further.

Examining the last period of a similar consolidation in the index (along with the other broad indices), which is also highlighted, we can notice the pattern lead to a dramatic fall over the following weeks. Although the patterns are similar, they must be seen in separate contexts. The previous pattern came after a strong uptrend, with little support and a lot of free area to fall. The current pattern has a notable area of support, which is highlighted in red. This support area seems to be holding up the index; however immediately above the index is its 200 day simple moving average, the blue line on the graph below. This moving average is an important and highly watched level of resistance, and on Wednesday the market tested the level and did not manage to close above it. 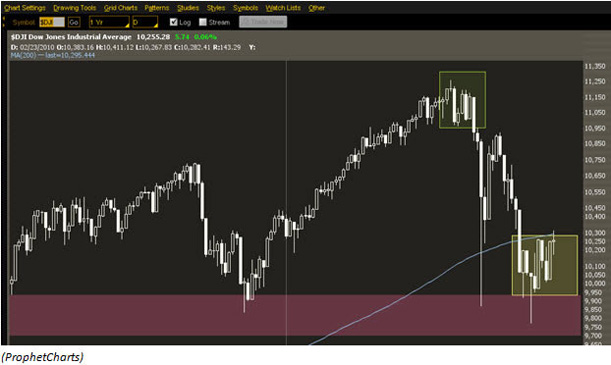 In conclusion, the market is certainly in a consolidation zone. It has a clear support (red area) and resistance (200 day moving average) that is currently holding it in a 300-400 point trading zone. However this consolidation, like all others, must come to an end with a positive or negative price breakout. Probabilities for a rally will increase if the DJI can close above its 200 day moving average for 2 sessions in a row. For the DJI to continue its fall, it must first breach the strong support that is currently holding it up, which would be a close below the 9,800 to 9,700 area for 2 trading sessions.

For the first quarter of 2010, the U.S. Department of Labor revealed the initial seasonally adjusted unemployment claims was 453,000, a drop of 10,000 from the previous weeks’ 463,000. The 4 week moving average, a figure that smoothes out weekly volatility, increased to 459,000 an increase of 1,750. Meanwhile, Federal Reserve Chairman Ben Bernanke has indicated that this high level of joblessness is imposing an extraordinary burden on American families. “High unemployment imposes heavy costs on workers and their families, as well as society as a whole,” he said on Thursday at a Chicago Fed forum. High unemployment ultimately decreases productivity for workers because long spells without work lead the unemployed to lose skills and hamper their chances for advancing to higher value-added jobs. According to April Fed Minutes, interest rates are expected to stay low for an “extended period of time” until the economy recovers.

Despite these negative reports, unemployment is always a lagging indicator at tracking whether the economy has emerged from recession. A Bureau of Labor Statistics report revealed that productivity has continued to increase across the board for many industries. Moreover, the Federal Reserve of St. Louis has released GDP statistics that have indicated 3 straight quarters of economic growth. These leading indicators have shown that the economy is well on the way to recovery yet unemployment is still hovering around 10% depressing the recovery.

The NIKKEI 225 hit a downward slump and ended with a percentage change of -1.12%, along with the Topix Index also sliding down to end at -1.14 % as of Wednesday June 2nd, 2010 as the Japanese Prime Minister Yukio Hatoyama’s resignation was announced. The decision of Yukio Hatoyama and his party No. 2 to resign was based on the fact that there was mounting pressure on the party’s possibility of winning in the expected elections in July after a decline in the recent polls. This announcement has added to the existing pressure on the Japanese markets and has brewed fresh worries of political instability that would weaken the Japanese economy. Hence, the Yen declined to a level of a 2 week low against the U.S. dollar with anticipations that the Finance Minister Naoto Kan, who earlier supported the idea of a weaken , would be replacing the Prime Minister of Japan. 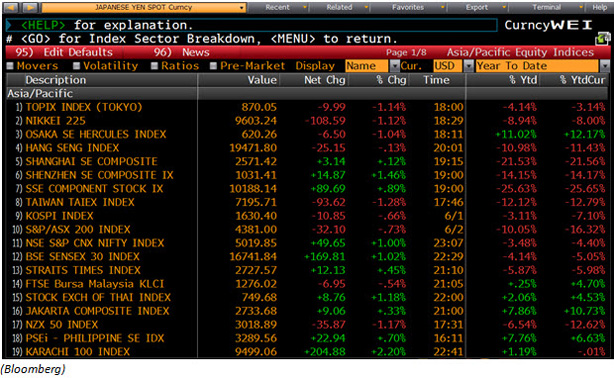 Moreover in China, the Hang Seng Index dropped 0.13% whereas the Shanghai Composite rose 0.12%. Also, Honda kick started their operations in the Chinese plants after almost 2 weeks of non productivity regarding disputes on wages for the employees.

U.K. – based Prudential’s Hong-Kong listed stocks rose 1.9 percent on Wednesday, after the announcement of its withdrawal from the 35.5 billion USD deal to buy AIA, which is AIG’s Asian life insurance business. This decision was due to the failure of the two companies to come along lines with the low priced offer from Prudential to AIG

Furthermore, Taiwan’s Hon Hai Precision Industry, the company which makes Apple Inc. products including the iphone, ipad and other top-brand electronic products, has raised wages at its Foxconn unit by 30% effective immediately. This was due to the fact that the company was facing mounting pressure from its clients and society as a whole, regarding a series of suicides that occurred on its base.