Equity markets traded down on Thursday as signs of growth waned.  China’s May leading economic index indicated that  PPI, CPI, retail sales and industrial production all grew at slower paces than expected.  The Bank of Japan kept its target rate at .10%.  There continues to be signs of slowing growth in the global market.

The domestic markets also traded down on Thursday. Domestic Catalysts include the Empire Manufacturing index which took an unexpected tumble down from 19.57 to 5.08, speculation about the financial reform bill and a decrease in the PPI from 5.8% (YOY) to 2.8% (YOY).  Initial claims came in 25K lower than in the previous week and seemed to offer a silver lining. Even so, continuing claims were up from the previous week.

Natural gas traded up about 5% on Thursday after inventory numbers remained static at 78B. It seems that the market was expecting an increase in the supply of natural gas and was disappointed by the weak figures. A Bloomberg survey of different analysts yielded a median estimate of 80B. 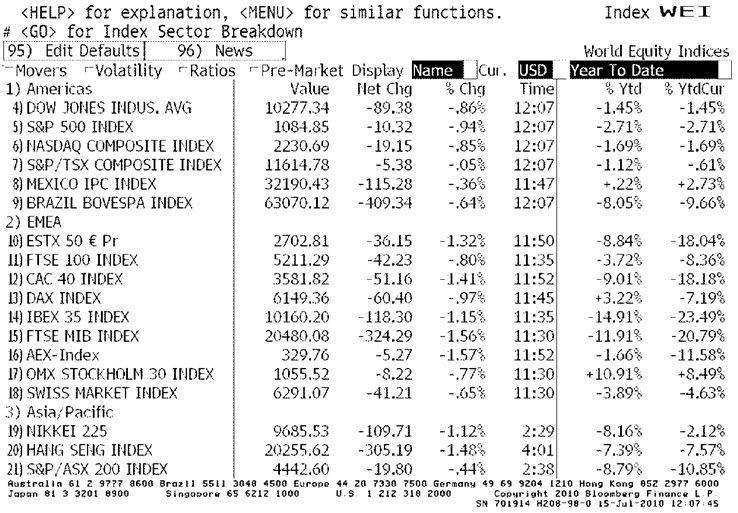 Several new companies will be seen listed in the private equity markets recently including KKR & Co. LP, which is the parent of private equity firm Kohlberg Kravis Roberts and whose shares will begin trading on the New York Stock Exchange on July 15, 2010. It plans to rise 1.93 billion by registering 204.9 million common units. KKR, essentially a buyout firm is prospecting for energy deals by targeting the ocean of natural gas that lies under parts of Appalachia and Texas in formations of shale rock. Thus, with the leveraged buyout business looking grim for the past few years, KKR is expanding its presence in shale, launching a new business with other industry veterans. Hence it seems that shale gas companies like KKR represent a departure from the typical buyout model with payoffs depending on the direction of gas prices.

Meanwhile, tech companies that plan to raise capital this week include RealD Inc., SMART Technologies Inc., and Qlik Technologies Inc. While RealD is a company based in California that specializes in supplying projectors for 3-D cinema screens and glasses for viewers, Qlik is a company that provides business intelligence software used to analyze costs, fund and organize information and plan to raise $151 million and $101 million respectively.

On the other hand SMART Technologies, a Canadian company which has been around for more than 20 years that makes interactive white boards and has installed more than 1.5 million of them worldwide, is most likely to have the biggest deal being the third biggest global IPO of 2010 and the largest in the U.S. It will trade as SMT on the NASDAQ and the Toronto Stock Exchange and expects to sell 35 million shares at a range of $16-$18 and hence raise over $700 million. However, $59 million of the proceeds from the IPO will be used to pay down part of its long- time debt.

Hence, with demand for IPO’s in the second quarter being as volatile as ever with all the economic uncertainty, it would be interesting to watch how the third quarter IPO’s hold, in the wake of the recent blowouts of CBOE Holdings Inc. and Tesla Motors.

Shares of Playboy Enterprises, Inc. (NYSE: PLA) rose 41% on a bid by founder Hugh Hefner to buy the remaining shares of the adult entertainment company. The company has struggled to turn a profit since 2006 and has continued to post losses for the first half of this year. Hefner plans to partner with private equity firm Rizvi Traverse Management LLC to purchase the remaining shares that Hefner does not own in order to take the company private. The former owner currently owns 69.5% of Playboy’s class A shares and 27.7% of class B non-voting shares which has allowed him to retain a large controlling interest in the company.

Despite offering a 41% premium for over the stocks’ price, the remaining shareholders have retaliated with a lawsuit claiming that Playboy’s board is not procuring the best price for shareholders. In light of the lawsuit and Hefner’s offer, FriendFinder’s Chief Executive Officer Marc Bell challenged Hefner’s bid by offering $6.25 per share, a 14% premium over the founder’s offer. Shares are trading around $5.50 indicating the market may believe that Hefner will use his influence to curb FriendFinder’s bid.

Just before the closing bell on Thursday, July 15th, the US senate passed the anticipated financial regulation bill. As mentioned on Bloomberg, this is “the biggest overhaul of financial-industry regulation since the Great Depression”, now awaiting the signature of President Obama. The vote came down to 60-39 approving of the new bill. So far speculators do not seem too pessimistic about the change, as the market actually paired its losses after the announcement and closed almost flat for the day. However some believe this lack of reaction comes from the lack of knowledge and clarity on the 2,300 page bill. Banking stocks were also mixed as BAC and C ended in negative territory while JPM and GS ended positive after the passing of the bill.

Part of the bill is meant to “create a mechanism for liquidating failing financial firms…include a council of regulators to police firms…and a consumer bureau at the Federal Reserve to monitor banks. It also expands oversight of executive compensation and derivatives.” Some, such as Senator Richard Shelby aren’t happy with the bill, stating: “It creates vast new bureaucracies with little accountability and seriously, I believe, undermines the competitiveness of the American economy.”