Ben Bernanke on the Economy

Wednesday and Thursday the Chairman of the Federal Reserve gave the Senate and the House his semiannual monetary policy briefing. Although the briefing in the House and Senate were the same the questions differed slightly.  The main concern on most of the congressmen’s minds was the high unemployment rate. The debt and deficit levels were also spotlighted. It seems that since the onset of the recession these hearings have been a place for politicians to show case their political positions – much to the detriment of constituents everywhere.  Chairman Bernanke was more ominous than previous hearings and said that the recovery was “unusually uncertain”.  Ironically enough, the Dow Jones Industrial Average dropped over 100 points on Wednesday only to rise 200 points on Thursday.  The VIX, the barometer of implied volatility in the markets, was up on Wednesday and flat on Thursday.  Oddly, Initial Claims were down last week and up this week. The Chairman went on to say that the Fed would pursue all available options to promote economic recovery including cutting the interest rates paid on deposits.  It is becoming apparent that the Fed could be running out of ways to combat this recession.

Shares of Nokia Corporation, the world’s largest cell phone provider, have been on an upward trajectory this week on speculation that the company will replace CEO Olli-Pekka Kallasvuo. Speculation emerged when the Wall Street Journal released an article on Monday claiming that an “individual familiar with the matter said the board was supposed to make a decision by the end of the month.”Kallasvuo has been an employee of Nokia since 1980 and has presided as CEO since June 2006. During the first year of his service, net income grew by 67.32% on larger sales volumes and a 4% increase in profit margin. However, this period also saw the introduction of Apple’s iPhone which revolutionized the industry by changing consumer preferences to smart phones.

Since Kallasvuo began his term, Nokia has failed to release a successful smart phone which has caused the firms’ share price to decline because of grim prospects for sales growth. Firms in the telecommunications industry compete on a price basis and better products. As more companies start offering new and improved smart phones- like Apples iPhone, Motorola’s HTC EVO, RIM’s Blackberry, and Google’s Droid phone, prices for these phones fall and consumers in the low to mid-income bracket, consumers in Nokia’s niche market, are better able to afford these phones. Without a smart phone, Nokia faces a huge competitive disadvantage which is being reflected in 68% decrease in market value since July 2007. This week Nokia released its quarterly earnings report which revealed net income also slipped by 41%.  Mr. Kallasvuo responded on CNBC by saying, “It needs to be brought to an end [speculation on his future in the company], the uncertainty isn’t good for the company.”

General Motors Co. on Thursday, July 22, 2010 has agreed to buy AmeriCredit, the car-financing giant for 3.5 billion. This deal was made in an attempt to fill the gap left 4 years back when GM ceased controlling interest in GMAC and also to increase the number of loans and leasing to buyers with low credit scores.

This transaction, approved by  the boards of both companies will be closed by the end of the fourth quarter where GM will pay $3.5 billion to buy the entire issued stocks of AmeriCredit at $24.50 per share, which is a 24$ premium with respect to the closing price of $19.70 on Wednesday. As shown below, the share price of AmeriCredit has surged the next day to around the range of $24.

GM CEO Ed Whitacre stated on Wednesday that “This acquisition supports our efforts to design, build and sell the world’s best vehicles by expanding the financing options we can offer to consumers who want to buy GM vehicles.”

According to dealers, subprime auto financing for less credit-worthy borrowers represents between 10-25 % of auto loans in the U.S.  market which is growing important for brands such as GM’s Chevrolet and hence, this acquisition seems as an endeavor to boost up GM’s future sales in NorthAmerica.

Since May 17th, not too long after the “flash crash”, the Dow Jones industrial Average has managed to confine itself within a range of approximately 1000 points. Due to violent swings in each direction, this type of consolidating market can be disastrous for traders attempting to catch the next trend. While it is difficult to assume the time length of the consolidation period, we can still make an objective attempt to understand if the buyers or sellers are in control. 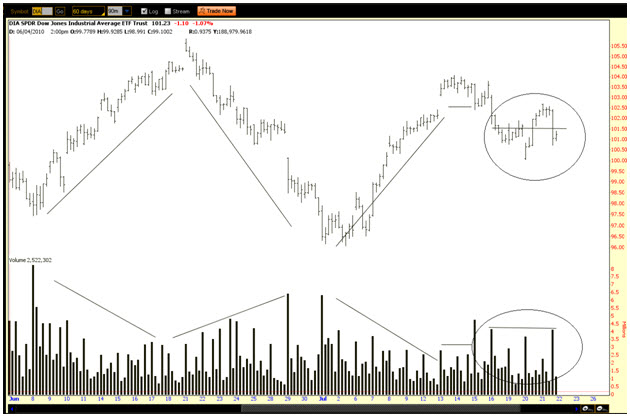 Above are the past two months of price and volume (using 90 min bars) for the Dow Jones Industrial Average ETF. It is evident that there have been three key movements that have occurred in the market with a clear divergence in volume.

Each rally has had a decreasing interest in buyers and each sell off has attracted more selling. Overall, we could rationally conclude that selling interest has outnumbered buying interest. What this means is that the market will need a significant increase in buying pressure to print higher levels. It also means that the market is fragile, and will not require very heavy selling to go lower.