Sales gains have been reported by U.S retailers this month, with the majority led by department stores and the like. This increase in sales is attributed by the recent Memorial day sales, back-to school shopping, clearance sales to make room for the fall merchandise and comparatively warmer weather which accelerated shoppers into the malls.

As seen in the table below, sales are up by 3.1 percent in June this year, compared to the 4.9 percent fall in June, 2009. Major retailers with the highest jump in sales includes Nordstorm at 14.1 percent, Abercrombie & Fitch Co. at 9 percent, Aeropostale at 8 percent, Macy’s at 6.5 percent and Zumiez at 10.9 percent; which are comparatively higher than that of the the average analyst estimates of 9.6 percent, 2.8 percent,7.3 percent, 6.1 percent and 8.5 percent respectively. 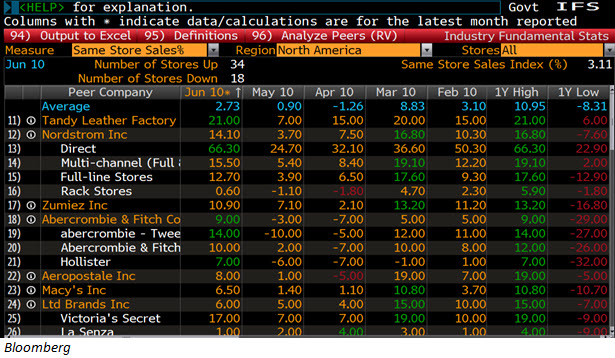 Even though there have been higher than expected gains, some apparel chains have not fared well. According to analysts, the retailers that had a smaller inventory had bigger gains due to the fact that they had better consumer sales and margins than if they had more inventory whereas, the ones with a surplus of  inventory were forced to reduce prices and offer discounts on their products. According to Wall Street Strategies analyst Brian Sozzi, it would be helpful to watch the  consumer spending trend during the month of June, since it helps to determine the shopping pattern during the ‘back-to-school’ shopping season which is the second largest after the Christmas Holidays in the U.S. Thus, even though we have a mixed result in the retail sector, it is expected to pickup after the month of July when the Fall season begins.

On Thursday, July 08, Russ Smyth, H&R Block Chief Executive Officer resigned from his position.  The news sent shares on a decline, as ticker HRB lost over 8% on the announcement.  Having been affected by the subprime crisis in 2007, H&R Block has been in an uphill battle to turn around, and the recent departure of the CEO could make it that much more difficult to regain strength. For now, Chairmen Richard Breeden, who actually brought Smyth the H&R Block, will be taking the seat. Analysts are taking different sides of the stock, as some believe this is a horrible situation, while others say it was simply a personal decision that doesn’t speak for the company as a whole. One analyst, Alexander Paris, spoke with CFO Jeff Brown, and notes on the private company Smyth will be transferring to as “something in the food industry.”  While under Smyth, H&R closed 400 offices and were downgraded by multiple research analysts. Some analysts believe the next best scenario will be a merger or buy out.

Richard Fisher on the Economy

Dallas Federal Reserve President Richard W. Fisher said this week on an interview with CNBC that a double dip recession is unlikely. Moreover, he conveyed to the public that monetary policy has already run its course and that the Fed has been “as accommodative as possible” by expanding the Fed balance sheet with over $1.25 trillion dollars worth of mortgage-backed securities, bonds, and loans as well as historically low Fed Funds rate. During the interview, Fisher’s tone demonstrated that there is more than sufficient liquidity in the system and that any additional purchases could do damage to market discipline. 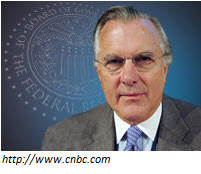 According to the latest Bureau of Economic Analysis GDP report, “US real GDP grew at a pace of 3.0% and corporate profits before tax increased to $215.1 billion in the first quarter, compared with $137 billion in the fourth quarter of 2009.” The economic data is in line with Fisher’s claim but he also stated that he expects the second half of 2010 to witness sluggish growth as employers struggle to figure out what their expenses will be for their future. Part of the problem of why the US is conveying weak economic growth is because of “random referring by the government” and “businesses uncertain as to what the rulemaking will be in Washington.” The Fed chairmen likened it to football by explaining that what is occurring is like “a referee changing first down to 15 yards.” The key lies in an economic concept known as the consumption smoothing mechanism which states that consumers smooth out consumption over the course of their lifetimes. Since consumers and firms are uncertain about the future regulatory regime, many have withheld larger capital expenditures and many are hoarding cash until they have more certainty as to what their costs will be. Much of the regulatory uncertainty is stemming from the passage of the healthcare bill, pending financial legislation, and massive deficits that might call for equally large tax increases.

The Bush Tax Cut debate continued this week, and should become a prominent subject as the 2010 elections near. The question is whether they will get extended, expire completely, or become “adjusted”.

This week SmartMoney.com did a study highlighting the affects of an expiring tax cut on the average American. The first point they bring up is the fact that all levels of income will be affect (if the tax cuts expire). “The current six rate brackets of 10%, 15%, 25%, 28%, 33% and 35% will be replaced by five new brackets with the higher rates of 15%, 28%, 31%, 36% and 39.6%.” Along with this, investor gains will be taxed at a higher rate. Long term capital gains will increase from 15% to 20%, with the maximum dividend rate “skyrocketing” to just about 40%. For those who are in the lowest tax bracket and don’t have to pay taxes on capital gains, they will be paying 15% – 28% starting next year if the tax cuts aren’t renewed.

In company with these changes, joint filing deductions will be abolished, forcing married couples to pay a higher rate. Finally, phase out rules will be reintroduced, taking away a hefty chunk of exemptions and deductions on the higher income bracket. At such a crucial time in the economy, with a stagnant unemployment rate and diminishing wages, the expiration of the Bush Tax Cuts could affect the average American more than some may believe. The issue is that the US has a mounting debt accumulating that is being used in an attempt to lift the economy. This debt must be paid off, and if the government isn’t making a return on their “investment”, the debt will have to be passed on to the US tax payer – meaning the tax cuts will have to expire. Although this is not a “popular” decision for the current administration, they may not have a choice.