This week crude oil data was released in the Summary of Weekly Petroleum Data by the U.S. Energy Information Administration. For the week ending September 10th, crude oil refinery inputs rose 15 million barrels. Refineries were operating at 88% of capacity. For the same period, crude inventories decreased by 2.5 million barrels, which was just under the estimated decrease of 2.6 million barrels.

Although the market saw a decrease in crude inventories, crude oil futures sold off for the better part of the week. The commodity sell off could be linked to a number of supply concerns. The Energy Department noted a 2.6% decrease in gasoline demand over the last week. Along with this, the Philadelphia Fed noted a contraction in manufacturing activity – which is directly linked to commodity demand. In company with this, Enbridge Energy Partners, a midstream pipeline firm, announced it will be reopening one of the largest lines that run from the US to Canada. This reopening will add over 670,000 barrels a day to the market. 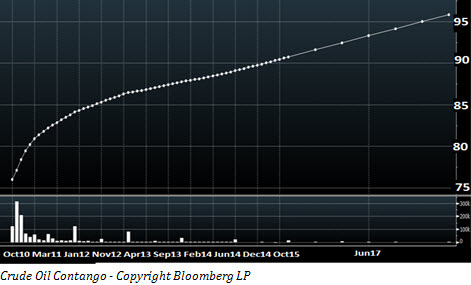 Some analysts believe we are currently over supplied with oil. Although inventories dropped for the week, they are currently near the highs of the year. This might be attributable to the recent increase in the contango forward curve in crude oil futures contracts. A contango forward curve for oil occurs when the price of future delivery months are higher than the current price of crude oil, which implies that speculators believe prices should increase towards the future price. Although contango itself is not an unusual event, the degree of convexity present in the current contango forward curve is much higher than usual, with spreads doubling over the last month. This has led major oil firms to hoard oil, expecting to sell it in the future at a much higher price. Firms such as ConocoPhillips are spending $41,000 a day to just to store oil in a single tanker. With inventory levels of crude oil increasing, it will be difficult for prices to rise without economic data demonstrating enough future demand to meet the current supply. 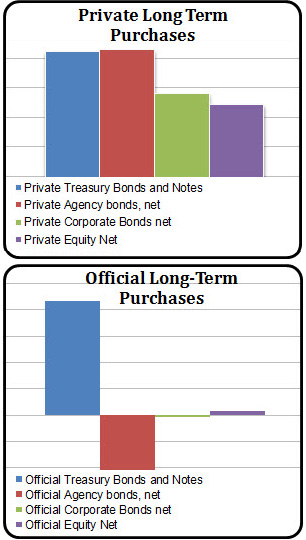 Net Long-Term TIC flow for the month of July was 61.2 billion dollars. This is an increase of 13.2 billion dollars from the previous month. Net long-term purchases measure the difference between the amount of domestic securities sold and the amount purchased. The increase in TIC flows is surprising considering the decline of the dollar in July.

Conventionally, as foreign investors decide to buy American securities, the conversion of foreign currencies into dollars pushes the price of the dollar upward due to the increase in demand.

Nonetheless, for July, the market trended upwards and the dollar traded down. Private foreign investors increased their holdings of Treasuries, agency debt, corporate debt and equity.

Official (government) foreign investors increased their Treasury holdings and their equity positions but decreased their holdings in agency debt and in corporate debt. Total Net TIC purchases, which include short-term securities, increased to 63.7 billion dollars for the month of July.

TIC data has become more volatile; it vacillates around a larger range of values. Even so, net foreign long-term purchases have exhibited an upward trend in the last few years. This might be indicative of the notion that investors flock to the perceived safer investments. 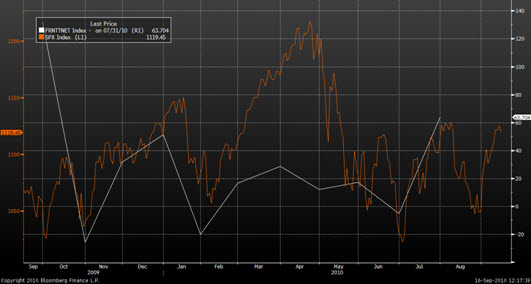 Over the last several years, traditional telco companies have been under increasing pressure by subscribers to meet the demand of faster internet speeds, or risk losing a vital customer base to cable companies. Traditional telephone companies maintained their access networks through copper telephone lines, which were later upgraded to digital subscriber line technology (DSL). DSL is the most prevalent form of internet communication for telco’s however; this technology only allows for low speed connections of up to 1.5 mbps which is a significant limitation for customers seeking to use network heavy applications like VoIP and online video streaming. In order to update their networks for the next generation, companies like Qwest and CenturyLink Inc. have contracted with companies like Occam Networks and Calix to upgrade their existing infrastructure with a fiber optics.

This week Calix announced that it would be acquiring Occam Networks at a price of 7.75 per outstanding share. According to the press release, shareholders of Occam Networks will receive 3.8337 per share in cash and .2925 of a “validly issued,

fully paid and non-assessable share of Calix common stock.” Both companies operated at a net loss with Occam networks losing $0.04 per diluted share and Calix losing $0.77 per diluted share. Calix believes that this merger will enhance their competitive position by combining their fiber optics expertise with Occam’s IP and Ethernet expertise.

On Wednesday Sep 15th after the Yen grew stronger against the Dollar in the past 15 years, the Bank of Japan intervened by buying USD currency and selling the Yen in order to weaken the Yen relatively. This is the first largest single- day intervention by the Japanese Government in 6 years and speculations are that they might do it again in the near future if the Yen rises again above a trigger point.

Bank of Japan sold yen worth more than $23.4 billion and this action was justified by the government as a counter measure to the rising Yen prices that would impair the Japanese economy which thrived on exports. This led to the U.S. Dollar to soar from the previous night’s low of Y82.86 to Y85.86 as shown below and the yen to be lowered from its 15- year high against the dollar. 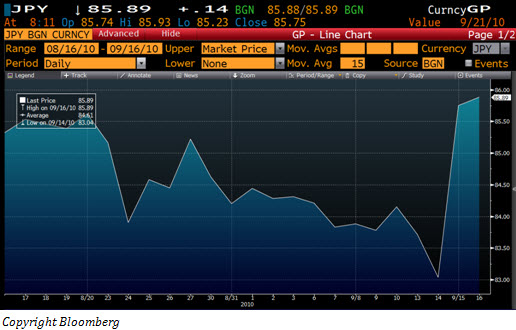 However, it is not only the U.S. dollar that faced the repercussions of the intervention. For traders, the Euro has now come up as a substitute against the dollar with the euro rising to its highest in more than a month against the dollar. Moreover, the short-term treasury prices have increased which led to the yields decreasing back to its record low levels. It has also affected the Japanese economy with a surge in Japanese stock holdings by investors worldwide due to a perceived increase in Japanese equities and has thereby boosted the country’s exports.

This actually shows us how much of ‘globalization’ of markets across the world has occurred with an event like this that originated in Asia having its wide- spread effects in U.S. and Europe. However, even though the dollar has risen over the span of two days, the yen is relatively at a high level and the question still remains as to whether this action by the Japanese government would be successful in the long run for the export driven economy of Japan.