Today, the technology sector saw some action with the Wall Street buzzing notions and speculations on a possible buyout bid for Yahoo involving AOL and some private-equity firms which sent Yahoo’s stock price rocketing up as much as 9.5% early today and with AOL going up 3.38% to $25.97. 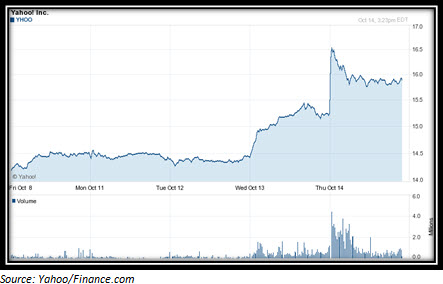 On Wednesday, The Wall Street Journal reported that AOL Inc was in talks with firms such as Silver Lake Partners and Blackstone Group LP about making a bid for Yahoo. The deal would reportedly include Yahoo selling off its 40% stake in Chinese Internet search giant Alibaba Group, parent company of Hong Kong-listed Alibaba.com Ltd. However, none of the parties involved have commented on this move.

Another major announcement in this sector was that of Apple teaming up with the largest wireless provider Verizon, to sell its iPad Tablet computer. Even though the iPad will be available through both Verizon and AT&T carriers, Verizon Wireless will sell the iPad bundled with the Novatel MiFi 2200 mobile hotspot device that would add $130 to the current iPad prices. Apple Inc. rose 0.6% to $301.99.

Moreover, amongst the other major players on the technology front, Dell Inc. was up 1.1% while Hewlett-Packard Co shares slipped 0.2%. Also, Microsoft Corp. shares dipped 0.6% after Credit Suisse cut its target price on the software giant’s stock to $36 from $40, based on information from the PC reports. Google Inc. shed 0.2% ahead of its quarterly earnings report, due after the market close. Advanced Micro Devices Inc., which is also scheduled to report earnings after the close, traded flat.