With US unemployment still hovering at ten year highs, congressional leaders and economists are pushing the debate further on pressuring the Chinese to appreciate their undervalued currency. Last week, the US House of Representatives passed the currency reform bill, a bill that would grant the Department of Commerce the ability to increase duties on Chinese imports. In support of the bill, US Treasury Secretary Timothy Geithner stated that inflexible regimes are “a multilateral problem… unfair to countries running more flexible regimes.” He further cited that undervalued currency regimes, like that China’s, risks fueling inflation and asset bubbles in emerging markets.

House Ways and Means Committee Chairman Sander Levin (D-MI) claimed that the undervalued Chinese currency has “impacted our jobs… with our goods to them more expensive.” However, US exports have remained on an upward trajectory during the last ten years. This weekend top ranking financial leaders will be meeting at a global summit in Washington in order to integrate nations to adopt cohesive economic and financial reforms. The Treasury Secretary along with other developed nations hope that they can compel the Chinese to shift their economic policy in the direction of currency appreciation. 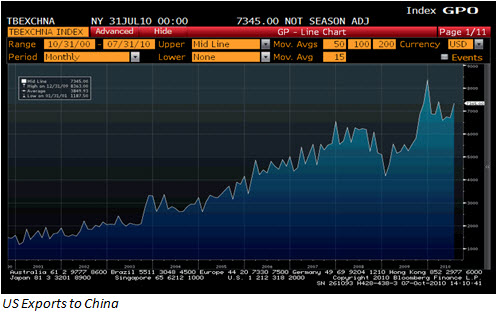 Pepsi Co’s third quarter profit has risen nearly 12% from last year helped by improvements in its U.S. beverages business and a rise in snack sales in Latin America. However, the company has cut its full-year guidance due to the expected currency translation effects from its foreign businesses. Moreover, Pepsi has trimmed its full-year profit forecast and formed a new business unit to drive growth in healthier foods as it tries to overcome tight U.S. consumer spending.

Additionally, company officials insist that none of their units were underperforming; Chief Executive Indra Nooyi said the economic environment remains tough and called consumers “very value-conscious.” “There is no doubt that economic uncertainty and high unemployment levels are keeping a consumer-led recovery at bay in many regions, especially in developed markets like the United States and Western Europe,” she told analysts on a conference call. “We expect these conditions to persist.”

Pepsi Co reported its third quarter net income of $1.92 billion, or $1.19 per share, compared with $1.72 billion, or $1.09 per share, in the year-ago period. Excluding one-time items, adjusted profit was $1.22 per share. Revenue surged nearly 40% from last year to $15.5 billion, aided by the company’s acquisition of its largest bottlers.  Looking ahead, the company has cut its full-year earnings growth forecast to a range of 11% to 12%, citing foreign currency translation effects as mentioned earlier where it had previously expected an 11% to 13% gain.

The company is also stepping up investments in developing markets including China, and in its North American beverage business and research. More importantly, they are now focusing on the global nutrition group that is based upon fruits, vegetables, grains and dairy; which is part of a previously stated strategy to triple the revenue of its nutrition business to $30 billion by 2020. This new nutritional group endeavors to take the existing brands and make them healthier and appealing to the ever increasing diet-conscious public.

Hence, we can see the challenges involved for consumer companies rising and their efforts to capture the fast-growing emerging markets despite a much weaker consumer spending in the developed markets these days. Nevertheless, it would be important to remember that these investments in emerging markets offer substantial returns over a long run and does not always show up in a single quarter.