In response to BHP Billiton’s unrelenting takeover bid, Potash Corporation of Saskatchewan Inc. filed a complaint for injunctive and other relief last week in the US District Court for the Northern District of Illinois. 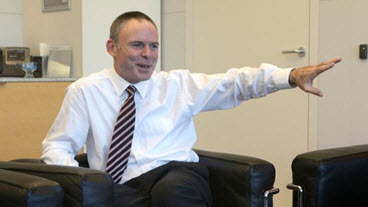 According to the legal brief, “Potash Corporation of Saskatchewan (PCS) seeks to preliminarily and permanently enjoin BHP Billiton Ltd… from proceeding on its attempt to wrest majority control from PCS shareholders.” In essence, Potash Corporation believes that BHP’s offer is a result of misleading statements that have tainted the offer in order to “confuse and coerce shareholders in tendering their shares to BHP.” PCS cites instances were BHP Billiton attempted to artificially depress Potash Corporation’s shares by stating that BHP planned to enter the potash industry through a greenfield investment.

Under UK securities law, offers that exceed 25% of a company’s market cap must be approved by shareholder majority. In order circumvent these requirements, Potash claims that BHP attempted to distort the price “before PCS recovered from a 52-week low” by announcing plans to become a major competitor. At the time the offered was announced, the deal amounted only to about 23% of BHP’s market cap. During the legal proceedings, BHP filed a motion to dismiss the case to which US District Judge David Coar stated that the evidence presented will stand until he decided whether to dismiss the case. It is clear that Potash Corporation is attempting to buy time for the November 18th deadline. They have even received notification from Canadian regulators that regulators needed more time to review the deal. As the November deadline approaches, Potash is seeking innovative ways to prevent BHP from completing a hostile takeover under the name of “protecting shareholder value.”

Health Plan to be dropped by McDonald’s
McDonald’s has issued a warning to the federal regulators that it may drop the existing health insurance plans for its restaurant workers unless the new requirement set forth by the U.S. regulators is waived off. Nearly 30,000 McDonald’s employees at 10,500 of its locations throughout the U.S. are currently participating in this plan, which provides a maximum of $2,000 to $10,000 a year in basic medical coverage at a cost of $14 to $32 a week. 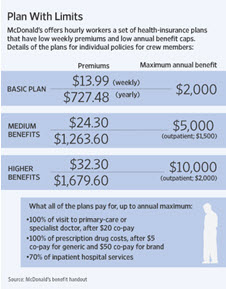 The current requirement for the ‘mini-med’ plan which covers almost 1.4 million Americans, concerns the amount of premiums that must be spent on benefits. Last week, a senior McDonald’s official informed the Department of Health and Human Services that the restaurant chain’s insurer won’t meet a 2011 requirement to spend at least 80% to 85% of its premium revenue on medical care. This percentage, also known as the ‘medical loss ratio’ would be unrealistic for mini-med plans due to the high administrative costs combined with a low spending on claims. Even though this requirement was incorporated by the drafters of the health bill as a measure to prevent insurers from spending more than a substantial amount on executive salaries, marketing and other overhead costs that are not directly beneficial to the patients; it reflects the repercussions of such a requirement on the low-wage working class people.
It seems as if the insurer would discontinue the mini-med plan unless they get an exemption from the requirement to spend 80-85% of premiums on benefits. They also say that dozens of other employers could find themselves in the same situation as McDonald’s. However, the government is waiting for the association of state insurance commissioners to draft recommendations on this matter.