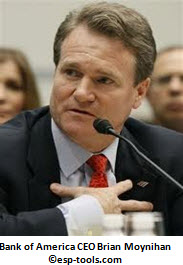 Some of the nation’s leading banks have come under fire recently on two fronts related to misreporting on foreclosures and poor underwriting standards for mortgages. Bank of America, the largest US bank by assets, has been in the limelight recently because of a class action lawsuit by bondholders holding $47 billion worth of residential mortgages originating from Countrywide Financial. Countrywide Financial has been accused of issuing mortgages that deviated heavily from underwriting standards. Large institutional investors like PIMCO, Blackrock, and even the New York Federal Reserve are calling for Bank of America and the Bank of New York Mellon to buyback theses mortgages.

Bank of America has contested these claims by stating that “they haven’t found any mistakes.” Bank of America CEO Brian Moynihan also stated that he would dispute all of these claims “in order to protect shareholder value.” Many banks have already been setting aside reserves if such an instance where to occur. According to Bloomberg, JP Morgan Chase has set aside $1 billion while Bank of America has set aside about $4.4 billion in reserves. After every crisis, those companies that rode the boom often take years to bounce back from litigation and negative sentiment. It seems that over the next few years financials will be trading within a range.

Yahoo! Inc. provides online solutions and search engines for users and advertising opportunities for businesses. Over the last couple of years Yahoo has faced difficulties adapting to its constantly changing environment. These issues were caused due to years of slow decision-making, failure to innovate, and increase in competition by the search engine giant Google and recent entrant Bing. This has caused a general sense of instability for its investors, who are now facing a dilemma of whether to hold or sell their securities.

Since Ms. Carol A. Bartz was appointed to Chief Executive Officer in January 2009, the company has experienced an increase in the value of its shares by 21.62%; however, when compared to the Nasdaq, the company has underperformed the market by a margin of 34.88%. Yahoo is still perceived as a work in progress. Many investors attribute this increase to the overall expanding market that we have seen since January 2009.

Yahoo’s 3rd quarter statement revealed that its net income more than doubled, to $396 million from $186 million or to 29 cents/share from the 13 cents/share of previous year’s quarter. Most of this increase was a consequence of the sale of its HotJobs business (an online job search engine) and not really from any innovation or measurable source of growth.

Despite an increase in earnings, Yahoo investors question whether the company will be able to maintain future growth amid growing competition. On one hand, some investors believe in Ms. Bartz philosophy of aggressively reducing costs and enhancing Yahoo’s display advertising business. On the other hand, others have been growing impatient and begun to demand that Yahoo’s board consider replacing Ms. Bartz, citing that revenue from these search advertising business has fallen substantially.

The Euro Dollar Exchange rate seems to follow a long term trend, which tends to appreciate and depreciate in a cyclical manner. In a typical cycle, the Euro has either risen or dropped for around 5-8 years before the trend reverses. Also, it is accompanied by an increase in the purchasing power parity by almost 20% and above before reversing itself. 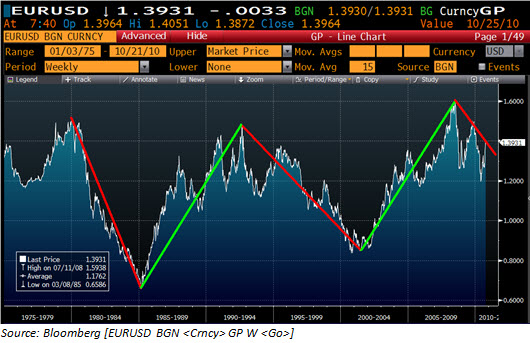 As seen above, the Euro fell rapidly from 1980-1985 and then rose substantially until 1992 and again slid sharply on an eight year downtrend, reaching the trough in the late months of 2000. During the following eight years, it rose again peaking in 2008. If this historical trend continues, we can assume that the Euro may continue to fall for the next couple of years till it reaches the next trough.

One of the major reasons for the fall of the Euro during the 1992-2000 was due to the enormous increase in U.S.’s productivity and growth in GDP that forced the Euro lower. Moreover, the various monetary policies undertaken during those periods also pushed the Euro down. The real short-term interest rates were reduced which resulted in a long term decline in the currency’s value.

As of now, it seems that history is repeating itself. Currently, the Euro – area GDP growth is lagging behind the U.S. with expectations of it remaining the same. Also, the recent financial crisis has reduced European exports, which is their main driver of growth and hence a weaker euro would help sustain their exports and keep them going. Thus, the Euro may continue to slide downwards against the dollar for the next 4-6 years.