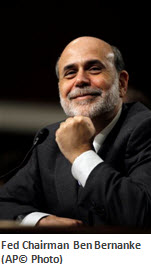 The Federal Reserve is planning to purchase more Treasury bonds and has incited critics over inevitable high inflation as well as financial turmoil. The Fed’s $600 billion program might give U.S. exporters an edge but it may also endanger global economic growth. Is the Fed’s plan a credible way to help end a desperate jobs crisis and revitalize a still-tepid economy? Few dispute that Fed Chairman Ben Bernanke is taking a gamble. Whether or not his plan succeeds in aiding the U.S. economy, it risks triggering a trade war and encouraging dangerous speculation in financial markets.

The US policy of a weaker dollar may threaten to wreck this week’s summit of world leaders in Seoul, where the Fed’s plan has set off vociferous debate. It is also claimed by many economists that the Fed did not have much choice; with U.S. unemployment stalled at 9.6 percent, short-term interest rates already near zero and Congress refusing to spend more to jolt the economy.

So the Fed announced plans to accelerate a loose monetary policy to purchase an average of $75 billion in Treasury bonds each month for eight months. The bond-purchase program is intended to energize the economy by forcing down long term interest rates. Those lower rates might encourage some consumers and businesses to borrow and spend more. A bigger hope is that lower rates will lift stock prices. As Bernanke has suggested, investors will shift money out of low-yielding bonds and into stocks. It is believed that higher stock prices make people feel wealthier and more willing to spend.

The US Postal Service (USPS) reported Friday another net loss of $8.5 Billion for the fiscal year ending on September 30th. As of the last annual report, the federal entity reported a net loss of $3 billion, meaning that the organization has seen an increase in losses by nearly 183%. The press release cited a record decline in mail volume stemming from a stagnant economy and a heavy competition from electronic media. In order to remain solvent, the USPS has initiated a campaign to eliminate nearly 105,000 full-time workers. According to USPS CFO Joe Corbett, the organization has been able to “realize more than $9 billion in cost savings over the last two years.” Mr. Corbett has express confidence that the management team “will continue [their] relentless efforts to innovate and improve efficiency.” However, he cited that “the need for changes to legislation, regulations, and labor contracts have never been more obvious.”

The USPS is plagued by two realities that management continues to highlight: increased competition from the internet and a saturated employee base. First-Class volume has posted year over year declines of 6.6% in 2010, 8.6% in 2009, and 4.8% in 2008. Although the drop-off in volume is declining at a declining rate, this still poses a problem because the entity has yet to find any viable alternatives to this product that represents over half of their revenues. In a report to Congress last month, the Postmaster General called for a 30% cut in the funding for retiree pension and health care plans. Currently, the average postal worker earns just over $80,000 a year, when factoring income and non-monetary benefits. With a tepid economic recovery and intense competition, the USPS will surely face reforms over the coming years.

The G-20 met this past Thursday at Seoul, South Korea. The two main topics of discussion were the disagreements between United States, Germany, and China in the matters of trade and currency.

Over the last couple of months the United States has been putting pressure on China to revalue the renminbi. If so, Chinese goods would become more expensive abroad and American exports would become more competitive, thus more attractive for the Chinese to buy. On the other hand, last week’s announcement of a $600 billion asset purchase plan by the Federal Reserve has raised criticism towards the US. This measure has been perceived as a move to weaken the US dollar by giving American exporters an advantage. Moreover, the Obama administration has indicated they wish to pursue a policy of strong export-led growth.

Besides China, Germany is another country that has been able to achieve an efficient recovery since the financial meltdown. According to Bloomberg, Germany has seen an influx by foreign investment coming from investors from countries like Ireland, Portugal, and Greece who are currently experiencing weak investor confidence. This has increased expectations that Germany will experience a 3.9% increase in GDP for the year.

Yet, the biggest portion of the recovery achieved by these countries comes from their trade surplus; a surplus that has traditionally been sustained by the US but now is seeing increased growth from emerging markets. There still remains large contention regarding the Chinese policy of an undervalued renminbi which the Chinese have expressed a weak interest in revaluing despite a call from the international community to pursue a more flexible policy.