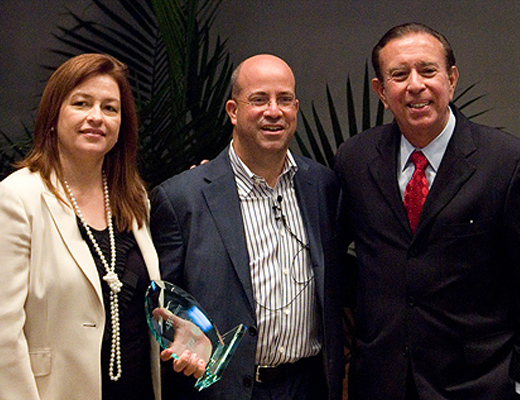 Jeff Zucker, a Miami public school graduate who rose to the CEO’s office at NBC Universal, told an audience of Florida International University (FIU) students, faculty and alumni that taking risks—and accepting responsibility—were the foundations of his success in business.

“Think about the status quo and question the business models in place each step of the way,” he told an audience of 200 assembled for the Wertheim Lecture at the College of Business Administration.

After he failed to get into Harvard Law School, Zucker’s 25-year tenure at NBC began with an internship at the Olympics. He first caught the nation’s eye as the 26-year-old executive

producer of the Today show, which he transformed from a ratings laggard into the dominant morning network news program by hiring new anchors and dramatically changing the structure of the program.

“I was single, I had no kids, and it became my whole life,” he said. “I understood the legacy of the Today show and what it meant to NBC, but I wasn’t bound by that legacy.”

Another challenge came as he took the helm of NBC’s entertainment division in 2000. CBS had moved its popular show Survivor to Thursdays, challenging NBC’s dominant comedy lineup. Taking inspiration from McDonald’s, Zucker created the now-popular concept of “supersizing” shows, adding extra minutes to hold the audience. “Ten years later, everyone supersizes their best shows,” he said.

The third example: Digital distribution. After Saturday Night Live’s “Lazy Sunday” digital short went viral, attracting millions of YouTube viewers in three days, NBC executives knew they had to respond. The answer was a joint venture investment in Hulu, which provides free online access to content, including NBC shows. The move was controversial and widely opposed within NBC, but necessary, Zucker said.

“You can’t put your head in the sand. You can’t deny this is the way people are consuming content,” he said. “Digital distribution, and protecting our intellectual property along with that, is the single biggest issue going on today.”

Zucker is scheduled to leave his post after U.S. regulatory approval of Comcast’s purchase of 51 percent of NBC Universal, which now has $16 billion in annual revenue from its broadcast and cable networks, theme parks and digital media.

In a nod to his hometown, Zucker shared memories of FIU’s start as a small campus where he took his first courses in the then-new field of computer programming.

“I give a lot of talks and speeches, but this is the first time my mom and dad could come out to hear me,” he told the audience, with Matthew and Arline Zucker sitting near the front. “I am very proud to have grown up in Miami.”

The Herbert A. Wertheim Lecture Series has brought distinguished speakers and experts in business leadership and entrepreneurship to FIU since 1993.

“What an incredible opportunity for business students to probe the mind of someone at his level,” said Roldan Torres-Moure (BBA’85), who attended the talk. “It’s a goldmine of information that you just can’t get from books.”