Over the last couple of months, China has been under pressure from the United States to revaluate its renminbi. The US claims that China is trying to sustain its trade surplus by artificially depressing the value of the renminbi to make its products more attractive abroad. China’s trade surplus has allowed it’s near double digit growth rate. But, such a high growth has raised concerns in China about inflation.

In November, inflation is expected to have increased from 4.4% in October. In order to tame inflation, China has increased its reserve requirement by 0.5% which will take effect on December 20th. The measure that requires commercial banks to deposit a higher percent of their assets into the central bank, aims to reduce lending with the purpose of slowing down inflation. In addition, this requirement is expected to continue to increase in the incoming year in order to tame inflation.

According to the New York Times different analysts from banks such as HSBC and Royal Bank of Canada, believe that this measure would not considerably hurt China’s economy because of sustained export demand. Even though in recent months China’s central bank has increased its deposit and lending rate to 2.22% and 5.56% respectively, China’s exports have still demonstrated a significant growth rate of 35% year over year. 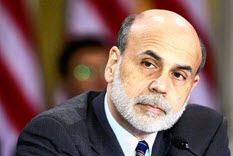 Federal Reserve Chairman Ben Bernanke is stepping up his defense of the central bank’s bond-buying program and pledging his confidence he could prevent runaway inflation.

Ben Bernanke appeared on ’60 minutes’ to defend the Federal Reserve’s recent stimulus move against intensifying criticism, saying that the economy is still struggling to become “self sustaining” without the Fed’s $600 billion Treasury bond-purchase plan.

Bernanke also argued that Congress should not cut spending or boost taxes given how fragile the economy remains. He thinks another recession is unlikely. But he warned that the economy could suffer a slowdown if persistently high unemployment dampens consumer spending. He also said “it’s certainly possible” the Fed could expand a program to buy $600 billion in Treasury securities beyond the initial target it announced about a month ago.

He also made a point that it could take four or five more years for unemployment, now at 9.8 percent, to fall to a historically normal 5 percent or 6 percent. But he is he’s “100 percent” confident the Fed will be able to ward off inflation, when the time is right, by raising interest rates and unwinding its stimulus programs.