Pandora Files with SEC for IPO

On 11 February 2011, Pandora Media Inc. officially filed a registration statement on Form S-1 with the Securities Exchange Commission. The investment banks underwriting the shares are Morgan Stanley and JP Morgan; however, the number of shares and the IPO price has yet to be determined. The company is looking to raise $100,000,000 in order to fund its expansion plans. The company has had a turbulent history over the last five years, especially with the increase in royalty fees by the Internet Radio Equality Act. Internet radio companies saw a magnanimous 1000% increase in the amount of royalty fees the Copyright Royalty Board (CRB) charged.

Despite unforeseen circumstances in royalty fees, internet radio stations including Pandora have reached a settlement with the CRB at 25% of U.S. gross revenue. Even with large concessions by the CRB, Pandora Media Inc. has yet to makea a profit within the last three years. The company has increased revenues by 276% from 2008-2010 or 6.51% geometrically over the last three years. The company believes that this increase in capital will allow the firm to grow its user base and increase its advertising revenues as copyright fees continue to decline; however, the prospectus clearly indicates that new investors will face substantial dilution as a result of old investors receiving a premium over what they paid for their shares.

Bernanke to maintain QE2 until June

Ever since the Federal Reserve announced its plan to buy long term bonds on August 10 of last year, the S&P has increased by 17.21 percent, unemployment has decreased from 9.60 percent to 9.00 percent and the consumer spending index has increased from 42.9 to 44.9. Yet, the Federal Reserve Chairman Ben Bernanke still believes that further stimulus is needed to sustain the economic recovery. Some ways the Fed plans to achieve this is by keeping the federal funds rate near zero and continue its policy of Quantitative Easing of $600 billion until June.

In his address to the Committee on the Budget of the House of Representatives on Wednesday February 09th, Bernanke addressed the concern about inflation by stating:

“Indeed, prices of many industrial and agricultural commodities have risen lately, largely as a result of the very strong demand from fast-growing emerging market economies, coupled, in some cases, with constraints on supply. Nonetheless, overall inflation is still quite low and longer-term inflation expectations have remained stable.” 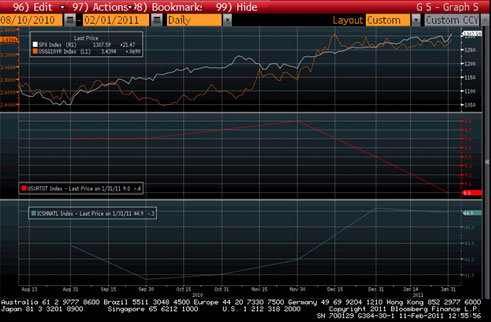