The official unemployment rate in the US decreased to 8.9% Friday with the Bureau of Labor Statistics reporting that employers added 192,000 jobs in February. This pick up in hiring represents the fastest pace of job creation in almost a year as well as decreases the unemployment rate to its lowest level since April 2009. The swift drop in unemployment figures over the last three months from 9.8% to the current 8.9% is the most dramatic three-month drop since 1983. The Bureau of Labor Statistics estimates that there are currently 13.7 million people in the US without jobs, almost double the pre-recession numbers recorded in December 2007. If the underemployed, individuals who have given up looking for jobs or working less than they would like are added to the calculation, the rate increases to 15.9%.

By far, the largest gainers from the job report were private sector employees who saw an increase in hiring of 222,000 new employees. The majority of private employers, with the exception of retailers, increased hiring in February. The overall figure was brought down by the loss of 30,000 jobs for state and local government employees while federal hiring remained flat. Investors had largely expected a positive jobs report and the numbers did nothing to counteract the negative effect of rising oil prices on the markets.

The improving unemployment numbers are consistent with improving economic conditions in the broader economy. Recent reports have shown that consumer confidence has increased to a three year high, US shoppers are spending more, manufacturing is growing rapidly and US exports have seen better sales abroad. While the employment report is encouraging, the country is still not creating enough jobs to drastically improve the near term economic outlook and increased pressure on state budgets will continue to hamper public sector job numbers.

Auto manufacturers are finally seeing sales surge to match pre-recession figures. Figures released this week showed a 27% increase in U.S. automotive sales for February. Toyota, now with its 2010 investigation and legal debacles of faulty electronics in the rear-view mirror, can experience prosperity once common to the global auto firm. This week Toyota posted a 42% increase in U.S. sales in February, as reported by Kae Inoue from Bloomberg News. Toyota- with a vehicle line-up of fuel-efficient cars, trucks and crossovers- is set to capitalize on rising fuel costs and a rebounding economy. With unemployment dropping to 8.9% and consumer confidence at post-recession highs, consumers will increasingly begin making large purchases including automobiles. Consumer confidence, as measured by Bloomberg Consumer Comfort Index, reached -39.3 last week according to a report by Nick Baker of Bloomberg. Positive value movements in this index depict improved confidence among the average U.S. citizen. This increase from -45 the prior month shows consumers are becoming optimistic of the economic climate, driving sales for the auto industry. 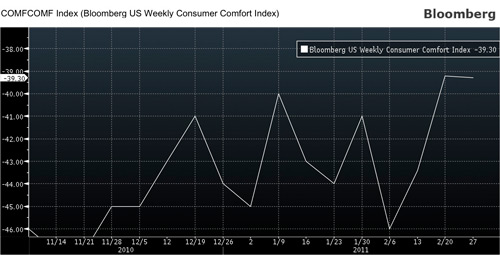 Toyota was not the only winner during the past month. Nissan, Honda, and Hyundai all experienced sales growth upward of 22%. Domestic brands have also seen outstanding growth. GM led the way with 46% increase in sales and Ford came in trailing at 14%. “GM and Toyota stood out for the month, but there were strong numbers across the board,” mentioned Jeff Schuster, a J.D. Power & Associates forecasting researcher. The current environment is pushing prices at the pump to shy of $4 causing a focus on small cars and compact vehicles to lead sales. Toyota is a perfect example- with the Camry, Corolla, and Prius models, all of which have estimated miles per gallon of 30 or more, recording a 50% growth in sales. Auto manufactures positioned as leaders in value and fuel savings will reap the benefits of the improving economy. The National Automobile Dealers Association is predicting 11% increase in overall auto sales for 2011. Although still lower than average sales figures from pre-2008 levels, many auto firms are excited to get back to producing and developing business. 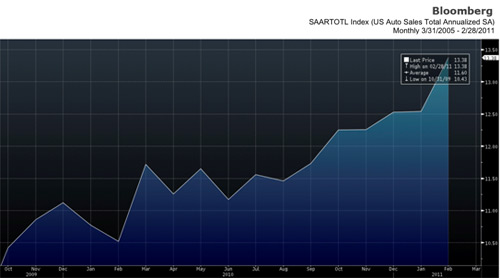 Euro Dominates While Uncertainty Looms Over Greenback and Aussie

Although the European Central Bank did not raise interest rates this week, President Trichet expressed hawkishness stating that “strong vigilance is warranted with a view to containing upside risks to price stability.” The ECB left rates at 1.00%, yet Forex traders interpreted Trichet’s concern over inflationary pressures as an indicator of a possible near future ECB rate hike, which sent the EUR/USD soaring to a four-month high at 1.4005. The Euro was dominant against all other currencies in this week’s trading.

The Greenback had the best performance this week next to the Euro. Positive unemployment outlook in the U.S. helped the Greenback maintain a strong performance against the Swissie, Aussie, Loonie, and Sterling. However on Friday, the Dollar slid despite a lowered U.S. unemployment rate because traders expected slightly lower unemployment data. Bearish sentiment towards the Dollar going into next week is fueled by speculation of euro zone interest rates rising above U.S. interest rates. The Federal Reserve expressed its openness to a second round of quantitative easing which will continue to keep U.S. rates low. If the Fed decides not to pursue a second QE, prospects of a future rate hike (tightening of monetary policy) become more likely.

Traders have become bearish the Aussie due to a number of factors. Australia’s central bank continues to give signs of moving towards a more hawkish stance. Australian Prime Minister Julia Gillard expressed concern for the Australian economy in regards to the strength of the Aussie. The publication “The Economist” came out with an article that warned of an Australian major housing bubble. In its quarterly index, “The Economist” has Australian homes as the most overvalued in the world. The only currency where the Aussie has shown strength is against the Kiwi. The AUD/NZD is approaching 20-year highs and remains to be overbought. The Kiwi has taken a huge hit ever since the earthquake in Christchurch devastated the area, negatively impacting the local economy. 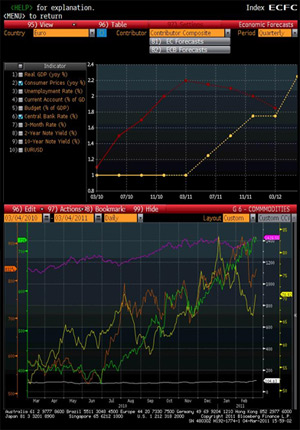 This past week Jean-Claude Trichet, President of the European Central Bank (ECB), announced that he is considering increasing the interest rate in April, in order to fight inflation concerns of the euro zone. The tool that the ECB employs is the main financing operations rate. This rate allows the ECB to maintain the liquidity of the money supply by establishing the interest rate of open market transactions with maturity of one week.

The increase in the rate is due to increasing concerns over inflation the region is experiencing due to high commodity prices. The main concern for the ECB is the increase in oil and food prices that have a great effect in inflation levels. In recent months, these elements have been especially sensitive as a consequence of from the turmoil in the North Africa and the Middle East, and increased demand in emerging markets. It is a common concern to investors that, if the ECB does not increase the rate, inflation is expected to keep rising and compromise the strength of the currency.