Recently S&P downgraded the U.S. AAA credit rating to negative amid the government’s inability to come up with an immediate solution to the nation’s budget deficit. S&P sovereign debt analysts stated their decision to downgrade U.S. debt had almost nothing to do with actual deficit figures but with concern over Congressional divide on a plan to solve America’s massive long-term debt. IMF officials have publically expressed similar concern as well. Last week, BRIC conducted a summit in Sanya, China where officials from Brazil, Russia, India, and China discussed possible changes to current world economic governance. Despite the attending officials stating their lack of desire to move away from the U.S. dollar as the world’s reserve currency, there has been recent talk of replacing the dollar as a reserve currency with Special Drawing Rights and propping up China’s role in the currency markets by making the Yuan a world currency. As emerging economies advocate more representation in the formulation of world economic policies, the Federal Reserve and the Treasury Department have come under increased scrutiny and pressure over recently enacted U.S. policies.

Recent international outcry from central banks of emerging economies is the result of a sudden new inflow of invested capital into such economies. As world investors increasingly lose confidence in U.S. debt securities, they are pouring investment into emerging economies, particularly as a hedge against the falling U.S. dollar. This has placed a large burden on countries such as Brazil, South Korea, Peru, and Turkey, because if this rate of inflow continues, these economies will endure more of already present inflationary pressure along with potential asset bubbles. In response, the IMF has put forth a measure that uses “capital controls” as a last resort to cool down this rapid inflow when all other options have been exhausted. IMF chief Dominique Strauss-Kahn stated that these controls were only to be used on a “temporary basis.” Addressing the IMF, Brazil’s finance minister blamed much of these inflationary pressures on monetary policy emanating from Washington. 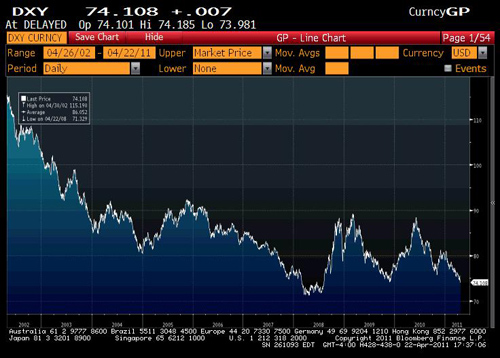 Much of the world blames U.S. economic policies (the Fed’s quantitative easing program in particular) for the recent rise in commodity and food prices; and that the sole purpose of the QE program enacted by Chairman Ben Bernanke last year was to devalue the U.S. dollar in retaliation to China’s undervalued Yuan. The Federal Reserve and the Treasury Department have publically rejected these criticisms and have expressed their actions as stemming from dedication to maintaining sound U.S. monetary policy. The ensuing dichotomy has the potential to negatively affect global investor psychology: a U.S. central bank with underlying power over world monetary policy. As long as the dollar remains to be the world’s reserve currency, the Fed’s monetary policy will have an overreaching affect on global markets. As other central banks and world governing bodies address the perceived negative effects that U.S. economic policies have on other domestic economies, the strength and credibility of U.S. debt and the U.S. dollar will continue to be in question.

April 20, 2010 set the date for the explosion that accord on a drilling rig controlled by BP named Deepwater Horizon. The explosion would eventually account for 11 total deaths and another 16 injuries. Sadly, this explosion was only the beginning and what came next was a series of operations to cap a oil leak caused by fiery explosion. 70 days later the leak was finally capped. There was never an official recorded amount of how much oil actually spewed into the Gulf of Mexico but estimates have figures near 8,000 barrels a day. With United States stepping in to keep the United States citizen best interest protected, President Obama and the United States government imposed a $20 billion dollar escrow account to BP to cover claims over the spill. Due to the magnitude of the spill and no true way of forecasting final costs of damage, BP reputation and stock price took a large dive.

Today, April 22, 2011, United States Coast Guard released a reporting claiming British Petroleum was not the primary entity to blame for the largest and costliest oil spill in U.S. history. Coast Guard concluded “deficiencies, and acts and omissions” from Transocean, the firm that actually manufactures, services and leases drilling equipment to large oil companies, should be held responsible for the massive explosions. Report points to three issues supporting the conclusions. Poor maintenance, bypassing of shutdown systems, and lack of personnel training all contributed to the series of events that took place pre & post explosion. BP is suing Transocean for $40 Billion claiming BP or its personnel are not at fault for the incident. Transocean is now also counter suing, claiming that based on terms & conditions under contracts entered into with clients, all responsibility was assumed by BP. This fierce litigation battle will mean massive amounts of penalties for Transocean if found guilty in court. The report released today will surely help BP’s fight to recover its spoiled reputation.

The S&P/Case Schiller composite index for housing was released Tuesday morning and home prices are down again. February marks the 8th consecutive month of declining prices in the 20 major metropolitan areas surveyed. This 0.2% price drop was expected and actually slightly better than the median forecast by economists of 0.3%. With February’s drop, prices have fallen 3.3% year over year with few expectations for improvement in the market. Prices in the 20 metropolitan areas have almost reverted to the lows seen in April 2009, the bottom of the housing market.

Several major economic factors are driving the decline in prices nationally. The home buyer tax credit expired last spring putting an end to the government’s financial incentives to potential new buyers. Also, with unemployment remaining elevated, homeowners struggling to meet their mortgage obligations are continuing to default into foreclosure or sell short. Foreclosures, short sales and excess inventory of existing homes are all major trends that are depressing home prices nationwide. With banks maintaining tight credit standards and potential buyers waiting for a perceived bottom to the market, analysts expect housing to keep declining for at least the rest of the year. Miami, along with San Francisco, Chicago and Minneapolis saw the largest price declines from January.