Social networking company LinkedIn (LNKD) came out with its IPO on Thursday, May 19th with the stock initially valued at $45 per share. LNKD opened at $83 per share and shortly before noon the stock soared to $115. Although it is not uncommon for an IPO to increase in double-digit percentages in the initial days of opening, LinkedIn’s IPO left market analysts in amazement. The stock price has since retreated to the $94 level. This rapid rise in stock value has benefited primary investors, some of which have realized 100% in capital gains just from the first day of trading. There has been somewhat of a pent up demand for social networking companies like Facebook, Twitter, and LinkedIn to come out with IPOs as traders see opportunities in the increasing valuations of such companies. Some Wall Street analysts have valued LinkedIn and Twitter at 10-figures and Facebook at 11-figures. After LinkedIn’s Thursday IPO, the company went from a $4.5 billion valuation to a near $9 billion value. Despite this rapid rise in stock value, many street analysts are pessimistic of LinkedIn’s prospects of maintaining such valuation as many advocate that the company is too overvalued (Morningstar has LNKD valued at $27 per share). If this perception of overvaluation continues to grow and LinkedIn’s value is corrected to the downside, this would affect current valuations of Facebook and Twitter, as their respective values would be revised to a more appropriate level.

Because of the extraordinary reception LinkedIn received Thursday on Wall St., some fear that this could lead to the formation of a new tech bubble, much like the dot com bubble in the 1990’s. During the dot com bubble around 300 companies issued public offerings as the excitement of the perceived near-term rapid growth of the tech industry induced investors to bid up relative stock prices, resulting in overvaluations which led to many of these companies crashing with only a few still around today. LinkedIn’s IPO performance could induce other social networking companies to follow suite such as Twitter, Facebook, Groupon, Skype, Zynga, and LivingSocial. 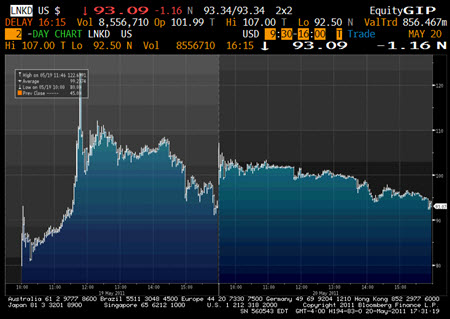 LinkedIn is geared towards business networking as it allows its 100 million users to establish professional networks, upload resumes, and access updates on new business opportunities. LinkedIn’s user base has been one of the main factors in attracting investors, and although advertising has been built into the LinkedIn business model, it does not generate the advertising revenue as a Google would. Google generates a significant portion of its revenue from advertising, making it one of the most attractive companies in the world. Advertising has become a major revenue generator for social networking sites who offer a free service. Pessimism will continue to lurk of LinkedIn’s perceived future value as the naysayers lack confidence that LinkedIn will be able to compete with the Googles and Facebooks of the world, given its current service and structure of revenue generation.