In the midst of high U.S. unemployment, pessimism over the U.S. economy, and worries of the possibility of Greece defaulting on its government debt, the DJIA and S&P 500 this week headed into their seventh consecutive week of losses. However on Friday the indices opened in positive territory after the French President and German Chancellor agreed on a package deal that would help Greece deal with its government debt burden. As of Friday 1:00pm EST, the DJIA saw a gain of 110 points with a rise of 0.84%; the S&P 500 gained 11 points with a rise of 0.87%. The NASDAQ Composite suffered losses near 28 points, falling .13%. The three indices have overall seen a downward trend for the June 17th trading day. 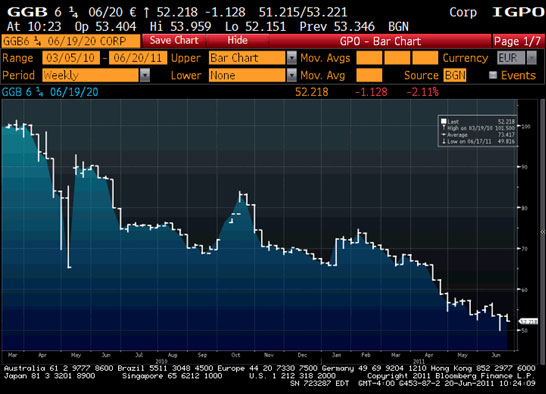 Economists, analysts, and traders have placed much emphasis on Greece’s government debt burden. After recent austerity measures were implemented by the Greek government, discontent grew among Greek citizens who started to see higher taxes with reduced government benefits. Friday’s announcement of an aid program comes after two days of political chaos accompanied by riots and protests over a faltering Greek economy. The intertwining of Greece’s economic and political difficulties induced Greece’s Prime Minister, George Papandreou, to appoint a finance minister apart of an overall effort to reshuffle his cabinet. French President Nicolas Sarkozy stated he and German Chancellor Angela Merkel would both support an aid package that would help Greece’s government meet its debt obligations. Sarkozy emphasized the need to act urgently and swiftly in order to achieve his goal of forming a deal by July the latest. Such a deal would involve asking banks holding Greece’s government debt to “voluntarily” take on some of the debt’s burden.