Last week Exxon Mobil Corporation and Rosneft (Russia’s largest oil producer) formed an Alliance that could potentially generate as much as $500 billion of investments between the two companies, as was stated by Russian Prime Minister Vladimir Putin. Exxon and Rosneft plan to initially spend $3.2 billion exploring Russia’s Arctic offshore and the Black Sea which could result in the discovery of new oil reserves, Russia being one of the largest oil reserve holders. Exxon will now replace BP as Rosneft’s partner as both (Exxon and Rosneft) move forward with the full support of the Russian government “In every way” as Putin also stated.

This news comes a few days before companies like Anadarko Petroleum Corp., BP Plc, Exxon Mobil Corp. and Noble Corp. had to evacuate workers from Gulf rigs and platforms due to tropical storm Lee; these rigs were be nearly stationary over the Gulf of Mexico last week. The Gulf accounts for 27 percent of U.S. crude production according to Bloomberg reports and these evacuations seriously disrupted production last week. These disruptions could be slightly felt through the week of September 9th.

As the storm passes and production resumes, possibly causing a slight impact on oil prices, the huge concern moving forward will be the slow growth of the economy and the possibility of Libya restoring oil production, which may curb prices. Oil traded at $86.45 a barrel last week. Crude oil futures are down over 5% this year, and the majority of analysts and traders surveyed by Bloomberg expect crude oil futures to fall this week as well (since April 2004, the survey has been 48% accurate).

For the past 2 years, European Governments have been under pressure to balance their budgets in order to deal with the fall out that the financial crisis of 2008 has left. In this timeframe we have seen countries like Greece, Ireland, and Portugal receive funds from the International Monetary Fund (IMF) and the European Central Bank (ECB) in order to put their finances in order. Even though it has been a painful process for most of these countries, because those rescue funds come with austerity measures attached, the markets have already priced their condition, and are now on spectator mode to determine future moves.

Now, the biggest concern is Italy. With close to one quarter of the debt outstanding for the euro-region, the second largest borrower of the continent is now facing questions about its ability to reduce its debt, which will be 120% of GDP by the end of year, while also increasing its growth which is expected to be less than one percent (1%) this year. 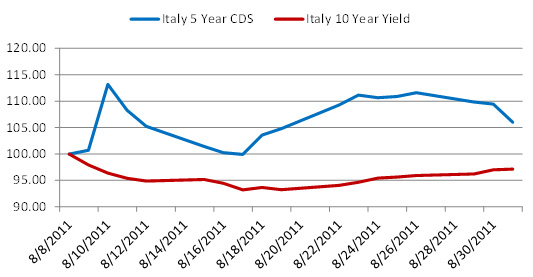 On august 8th, the ECB announced that it intended to help Italy alleviate its pressure by buying almost 43 billion euros in Italian and Spaniard debt. Since then, for the period 8/8/11 to 8/31/11 the 5 year CDS have increase 6%, and the yield on the 10 year Government bond has decreased 2.87% (from 5.28% to 5.13 %). These changes reflect the increase in the demand for the government bonds that the ECB is doing, as well as the increasing concerns of the market for the quality of the Italian debt.