With hand devices acquiring a more prominent role in individual’s life every day, Research In Motion( RIMM), the maker of Blackberry, seemed to be destined to become the leader in the industry until very recently. Yet, the inability to adapt to new environments, the increase in competition, and the lack of innovation; have doomed the company to suffer a 59.69% decline YTD on its stock price, while competitors Apple (AAPL) and Google (GOOG) are performing 22.16%, and -7.96% respectively.

Just this week, the company missed analysts’ estimates for the 2Q ($0.80 EPS from a predicted $0.88 EPS) due to lower than expected sales of its phones and tablet computers. For 2Q the consensus among the analyst was that RIMM would sale approximately 11.9 million, but the actual number of units sold was turned out to be 10.6 million which led a sharp decline in net income of 59% in comparison with the same period last year. 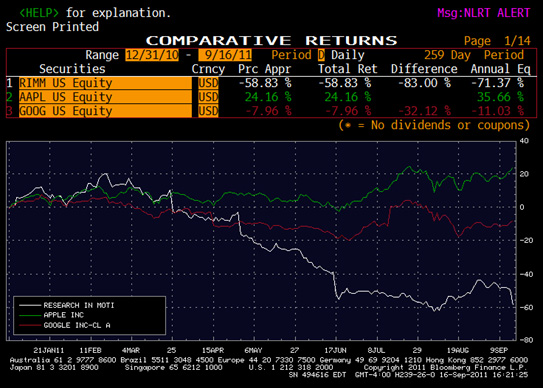 Kweku Adoboli, who is the trader that was arrested on September 15, 2011 after it was discovered that he made unauthorized trades that caused a $2 billion loss and was charged with fraud and two counts of false accounting, which London police dated back to 2008. Adoboli worked for UBS’s investment bank on its Delta One desk, which handles trades for clients. Adoboli hired criminal law firm Kingsley Napley LLP in London, which is the firm that advised Nick Leeson, the former derivatives trader who caused the collapse of Barings Plc.

The euro rose the most it had all month after news last week that the ECB will coordinate with the Federal Reserve and other central banks to conduct three separate dollar liquidity operations to ensure lenders have enough of the currency through the end of the year; along with news coming from Germany and France assuring investors that Greece will remain a member of the euro. This positive news allowed an increase in 15 of the 18 western European markets.