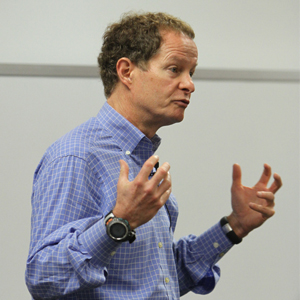 John Mackey is on a quest to give capitalism the goals—and the respect—it deserves.

“Business has lifted humanity out of the dirt,” he said, “and that story has not been told.”

The co-founder and co-CEO of Whole Foods Market shared his thoughts on the deeper purpose in business outlined in his new book, Conscious Capitalism: Liberating the Heroic Spirit of Business, with over 100 attendees at Florida International University’s (FIU) Wertheim Lecture Series. Presented on April 4, 2013 in partnership with Books and Books, it was the first Wertheim Lecture at FIU’s downtown Miami facility at 1101 Brickell Ave.

“Business needs to discover its higher purpose,” Mackey told students, faculty and community members. “If you defend yourself on just trying to create prosperity, you’ve lost the argument. When business begins to articulate, first within its own community, what its purpose is, we will begin to reverse that mentality.”

Rather than acting just to the benefit of shareholders, Mackey advocates a broader approach, including employees, vendors, many of them small businesses, and customers/community stakeholders as equally important to overall goals.

Sharpening a focus on the greater good.

In addition to a focus on creating value for this wider group of stakeholders, conscious capitalism creates a need for a different kind of leader, a spiritual servant-leader who sees the broader welfare of the organization, he said. The movement also calls for a change in culture, to create a more humanistic work climate, and empower those in the workplace to reach their higher potential in life and work.

“Darwinian metaphors have taken over corporate mentality: kill or be killed. Survival of the fittest,” Mackey said. “It makes it hard to nurture community. We have to create a culture that leads to a better place to work, where people can learn and grow.”

“The talk was phenomenal,” said Leslie Kaplan (BS ’88) and co-founder of Ready, Set, Cupcake, a Whole Foods Market supplier. “Whole Foods is a role model, not just for my business, but for any business that wants to bring a quality product to market.”

Since 1993, the ongoing Herbert A. Wertheim Lecture Series has brought distinguished speakers and experts in business leadership and entrepreneurship to FIU.