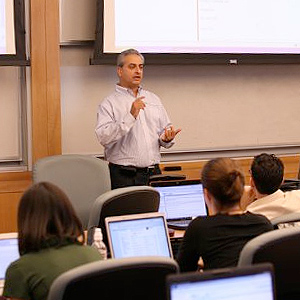 Elio Alfonso, assistant professor, was featured on radio station 880, The Biz, on the Pete De La Torre program on October 3, 2013.

Monica Chiarini Tremblay, associate professor, and Gloria Deckard, associate professor and associate dean of the Landon Undergraduate School, presented the seminar “One Size Doesn’t Fit All: Observations from the Process Evaluation of HIE in Four States: Alabama, Florida, Illinois and Rhode Island” on October 10, 2013 as part of the CHiP (Center for Healthcare Informatics and Policy) Seminar Series at Weill Cornell Medical College in New York City.

An article by Jerry Haar, professor, titled Intrapreneurs’ are crucial to driving innovation,” was published in the Business Monday section of the Miami Herald on October 21, 2013.

Modesto Maidique, professor and Alvah H. Chapman Jr. Eminent Scholar Chair in Leadership and executive director of the Center for Leadership, hosted The Chapman Leadership Honors on October 3, 2013. Alberto Ibargüen, president and CEO of The Knight Foundation, received the Transcendent Leader Award and Susan Amat, founder of Venture Hive, received the inaugural Emerging Leader Award.  On October 18, Maidique hosted Martin Seligman, the leading authority in the field of Positive Psychology, as the opening lecturer of the 2013-14 Leadership Lecture series presented by the Center for Leadership. Maidique also was the keynote speaker at the 2013 Legacy Lecture series presented by FIU’s Order of the Torch on October 7, and on October 15, he served as the education expert on the MIT Enterprise Forum Panel, “South Beach to Silicon Beach.”

At the 2013 Geopolitical Summit, “America at the Crossroads: Power and Strategy in U.S. Foreign Relations,” held at FIU, David A. Wernick, senior lecturer, was a panelist in the session with featured speaker Moises Naim, a senior associate in the International Economics Program at the Carnegie Endowment for International Peace. The session was entitled “The End of Power: From Boardrooms to Battlefields and Churches to States.”

Magnusson has had his paper “The Spillover Effects of Prototype Brand Transgressions on Country Image and Related Brands” accepted in the Journal of International Marketing.

Carlos M. Parra, clinical professor, presented results of research he is doing with Nestle and a Dominican Republic microfinance institution at Forito Microfranquicias in Guadalajara, Mexico. This all-day microfranchise forum held in October is the most prominent regional event on microfinance.

Kimberly A. Taylor, associate professor and Macy’s Retailing Professorship, was quoted in a Sun-Sentinel online article “What happened to legendary radio station WSHE? It has morphed again” by Johnny Diaz on October 26, 2013.