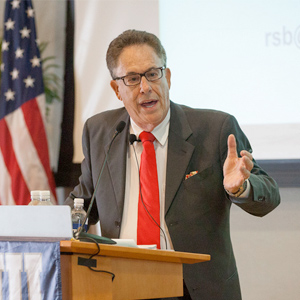 When an insurance guy has Donald Trump as a client, he’s worth listening to.

That’s what the 75 attendees found as Richard Bernstein spoke on “Linking Health to Wealth” on October 16, 2013 as part of the Wertheim Lecture Series at the College of Business at Florida International University (FIU).

“Your generation is on the right track,” he told audience members, many of them students. “You don’t expect to receive Social Security or retirement benefits.”

Bernstein is CEO and founder of Richard S. Bernstein & Associates, a national leader in the health care and life insurance industry.

He told the group that they would buy many insurance policies in their lifetime, including health insurance, and those decisions can have a huge impact on their wealth. Saying that “health is the defining issue of the 21st century,” Bernstein gave the example of his son who has two children that were hospitalized for prolonged periods

“If he didn’t have health insurance, he would incur a $3 million debt,” he said.

Bernstein, consistently ranked among the top insurance agents in the world, offered opinions on the Affordable Care Act, compliance issues for hospitals and other hot topics.

“Half of young adults – Millenials – have rainy day funds,” he said. “They’re savvy, ambitious and they have goals.”

He recommended that students start saving as quickly as possible.

He stressed the importance of studying insurance policies before making a decision. He pointed out the advantages of long-term care insurance, encouraging audience members to talk to their parents to see if they’re covered.

“What I learned in college is to do a lot of listening,” he said. “A lot of people don’t listen. They go in with a preconceived notion of what people want. But if you listen long enough, they’ll tell you what they need and why they need it. That’s really important.”