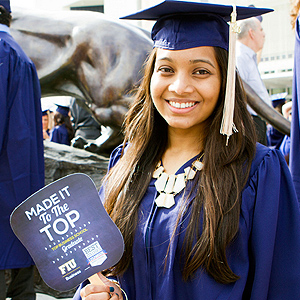 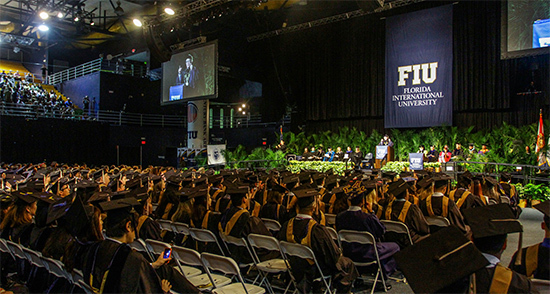 Years of study, determination and hard work paid off for nearly 1,000 students in the College of Business at Florida International University (FIU) when they were awarded degrees at the Fall 2013 Commencement.

On Sunday evening, December 15, 2013, 596 students from the R. Kirk Landon Undergraduate School of Business were recognized at a commencement ceremony; 371 students from the Alvah H. Chapman Jr. Graduate School of Business were honored at a commencement on the morning of December 17. Ceremonies were conducted at the U.S. Century Bank Arena, located at FIU’s Modesto A. Maidique Campus.

“This fall our students have proven once again that nothing gets in the way of their educational goals and dreams,” said FIU President Mark B. Rosenberg. “I’m proud to call them Panthers and wish them well on their new journeys as alumni.”

Among the group were three Worlds Ahead Graduates, a designation that singles out individuals with strong leadership qualities, a desire to change lives and a record of academic achievement.

Mario Di Giovanni (Bachelor’s, Economics and Finance ’13) led a Model UN team from 2011 to 2013 that ranked among the top competitors in the U.S. In addition to being a leader of the Venezuelan Student Alliance at FIU, Di Giovanni co-founded VotoDondeSea which promotes community and voting rights for Venezuelans living abroad. The organization is now a worldwide movement, with branches in Orlando, Boston, Toronto, and Madrid, among other cities. Along with his fellow co-founders, Di Giovanni collected donations to take more than 1,500 Venezuelans by bus to New Orleans to vote in the Venezuelan presidential elections. On a study abroad trip to Bangkok, Thailand in 2012, he helped lead the FIU student delegation as it provided assistance to the Baan Chivit Mai Center, a school for underprivileged children. A member of several academic and honor societies including Phi Beta Kappa, Di Giovanni’s goal is a career in international development.

Eduardo Finol (Bachelor’s, MIS and Finance ‘13) came to the U.S. from Venezuela when he was eight years old; he witnessed his parents struggle and was even homeless for a while. But Finol earned his bachelor’s degree in management information systems and finance while working full-time, in supermarkets and on farms. In Fall of 2012, Eduardo served as the first vice president of public relations of FIU Toastmasters. A longtime member of ALPFA FIU, he was elected to serve as its vice president of accounting in spring 2013 and helped pioneer the Mentorship Program in the organization. Finol was selected for several internships, including one working with Santander’s Business Performance group. He has accepted a position with PricewaterhouseCoopers in their Risk Assurance practice in Miami; he will be providing IT consulting services.

Mame Marguerite Tall, (Bachelor’s, Finance/International Business ’13) born in Senegal, achieved a 3.97 GPA while completing majors in finance and international business. Tall was selected to be a member of the Guildford Forum, a summit for young international activists organized by the British Council. From this group, she was selected to receive the title of Global Change-maker. Tall’s international community service includes tutoring orphans in Senegal and serving as the U.S. representative to the National Association of Albinos of Senegal. Tall was the only international student selected to intern with Miami-Dade County Mayor Carlos Gimenez, as part of the Mayor’s Executive Internship Program. She also interned with Deloitte in Dakar-Senegal and with a Washington-based private equity fund.

Five members of the college’s staff were awarded degrees.

Nancy Castillo (BBA ’13) is a student assistant in the Office of International Affairs and Projects. She completed her Bachelor of Business Administration degree in Marketing/International Business.

Raji Charaf (MS ’13), an IT assistant and web developer, completed a Master of International Business and a Master of Science in Telecommunication and Network Engineering.

Natalie Osorio (BS ’13) received a Bachelor of Science in Mass Communications, Public Relations. She is a student assistant in the Healthcare MBA department.

Joshua Roman (BA ’13) received a Bachelor of Arts in Economics. He is a student assistant in the Healthcare MBA department.