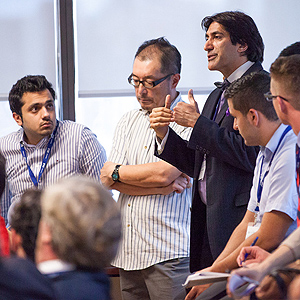 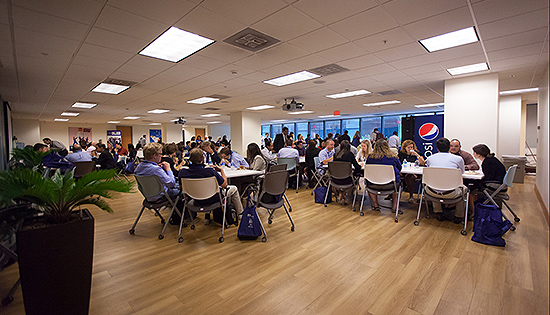 FIU Master of International Business student Alfred Katty was on the winning X-Culture team with students from Brazil, Pakistan, Spain, and Tallahassee, Florida. Another COB student, Telmo Quiroz, was on one of the four finalist teams.

The Louis Vuitton X-Culture project began on September 23 when the 64 participating students from 19 countries received their assignments and teammates. They had one month to work virtually, facing obstacles including differing time zones, language barriers, connectivity issues, and cultural differences.

Students learned that Louis Vuitton has been named the world’s most valuable luxury brand, valued in 2013 by Interbrand at $28.4 billion, up from $25.9 billion a year earlier. Sales at the Paris-based conglomerate reached $9.4 billion in 2013.

The X-Culture teammates met for the first time in Miami at the AIB conference opening. Executives from Louis Vuitton spent several hours with the students, answering questions and sharing in-depth details about the brand’s history, philosophy and growth strategy.

“At the core of the brand’s identity are tradition, expertise, audacity, innovation, personalization,” said Fabiane Rouille, area director Caribbean, Colombia and Panama at Louis Vuitton. “The store is our DNA, it’s where our image is open for everyone to see and where we connect with clients.”

FIU MIB student Katty and his teammates chose Louis Vuitton’s customer experience project, focusing on the key point-of-sale: the brand’s boutiques. In addition to stand-alone stores, the company sells its products only in lease departments in high-end department stores and via its website.

Work on the project included interviews with three luxury brand shoppers – in Brazil, Florida and Spain – as well as sales representatives from Louis Vuitton, Chanel and Prada.

“The interviews enabled us understand why people spend high money on luxury brands, and the in-store customer experience was one of the reasons people returned for more purchases,” said Katty.

The students also visited Louis Vuitton, Chanel, Gucci, and Prada boutiques in Brazil, Miami, New York, and Spain, getting a clear picture of how Louis Vuitton’s rivals are enhancing their customer experience. They also analyzed reports from McKinsey & Co., AT Kerneay and Euromonitor.

In the final presentation, Katty’s team recommended that Louis Vuitton establish a loyalty program for customers (LVIP) and create an “LV corner” in some stores, featuring top-line amenities and showcasing Louis Vuitton’s two-year walk from Anchay to Paris, his early days as a trunk maker and how the brand rose to where it stands now.

“One of the things the Louis Vuitton executives were concerned with is that many customers don’t know Vuitton’s background,” said Katty. “Knowing the history would make them appreciate the brand. And when they’re in the store waiting, they have something to learn.” 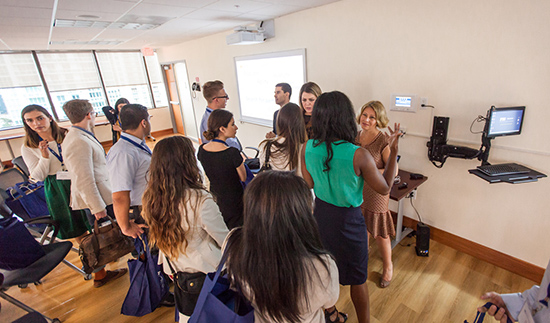 Virtual team competition was an “eye-opener” for FIU students.

With his team emerging victorious, Katty, who will receive his MIB in December, describes X-Culture as an eye-opener and a huge networking opportunity.

“I interacted with people from all over the world, with different cultures and different ideas,” he added. “Most importantly, the challenge had to do with giving recommendations to a multinational brand like Louis Vuitton; that’s an incredible opportunity.”

In addition to Katty and Quiroz, three other FIU students, all in the COB’s MIB program, participated – Valentina Londono, Viviana Espinosa and Salome Micheal.

“When you’re working virtually, it’s easy to get lost behind a computer screen,” said Londono, a banker who will graduate in December. “This project helped build my communication skills, which are important to ensure the accountability of all virtual team members.”

COB assistant professor Peter Magnusson, conference chair, pointed out that research is an important component of the international marketing class, with assignments that include evaluating market attractiveness – precisely one of the challenges that Louis Vuitton presented to X-Culture participants.

“X-Culture is a real-world application of the lessons and resources we’ve dealt with in class,” said Magnusson.