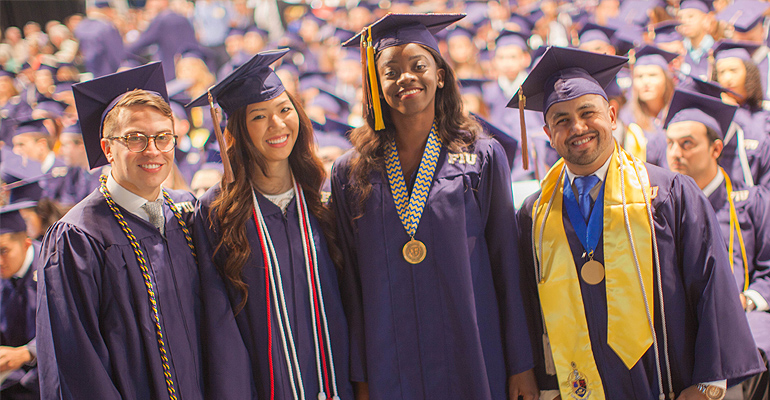 As almost 1,000 students from the College of Business were awarded degrees at the Spring 2016 Commencement ceremonies for Florida International University (FIU) held on May 9, 2016, President Mark B. Rosenberg singled out five students who received the designation of Worlds Ahead graduate.

Established in 2010, FIU’s “Worlds Ahead” recognition goes to individuals with strong leadership qualities, a desire to change lives and a record of academic achievement.

For each Worlds Ahead student, President Rosenberg introduced their family and friends attending commencement and told the audience at the U.S. Century Bank Arena about the graduate’s accomplishments.

“They have overcome challenges and demonstrated leadership,” Rosenberg said. “They have changed lives!”

Born in Kansas, Nihat Ahmed has an Army dad and lived in 20 different cities and five countries and learned to speak five languages.

As an FIU student, Ahmed is all about fitness. After being certified as a fitness trainer, he worked at FIU’s Wellness and Recreation Center, where Lia Jiannine, assistant director for fitness programs, became his mentor. Ahmed created group fitness classes and was the trainer for FIU Cheerleaders, FIU Golden Dazzlers and for Miss FIU 2016. For the student newspaper, Ahmed writes – under his nickname “Nihat Strider” – a fitness column.

Recently, Ahmed launched his own company, Strider Training, which will offer instructional apps of workouts and health information. Now with his business degree in international business, Ahmed will pursue a master’s degree in marketing at FIU this fall.

Annie Cheong, from the Honduras, discovered marketing in her junior year when she took Introduction to Marketing taught by Tim Birrittella, who provided help and motivation as she earned her marketing degree.

She has earned certificates in retail marketing and marketing research and was a paid summer intern at Jarden Corporation.

Annie earned a 3.62 GPA, wants to use her talents at a marketing agency and to pursue her MBA in the next few years.

Taphenes Koroma, a tennis player who represented her home country of Trinidad and Tobago in international competitions, came to FIU in 2012 on a scholarship. Her initial academic success resulted in joining the Honors College and two honors societies.

But Koroma struggled with feelings of isolation and her GPA plummeted, resulting in academic probation and danger of losing her scholarship. At home in Tobago on break, she realized there were no college opportunities there and decided to change her downhill course. Back at FIU, Koroma regained focus and with stellar grades won a second academic scholarship.

Koroma recently brought an idea to FIU’s Office of Engagement: a one-stop organization where new and current Panthers receive support throughout the semester not just at the beginning. This organization, called College 101, is ready to launch.

Born in Bogota, Colombia, Daniel Rodriguez and his family eventually moved to a one-bedroom apartment in the U.S.

He enrolled in FIU’s first financial literacy program for high schoolers and next became an FIU student in 2012. Rodriguez served as president of FIU’s ALPFA student chapter and led it to Chapter of the Year status.

Rebecca Wilde came to FIU from Northumberland, England, as a freshman on a swimming scholarship, earning a Bachelor of Science Degree in Hospitality Management in only five semesters. This May she earned a master’s degree in International Business.

Wilde has distinguished herself in swimming especially in 200- and 400-yard individual medley events, keeping her grades up even with swimming practice and fitness sessions every day. Wilde became captain of FIU’s Swimming and Diving Team and this past February in Atlanta she led her team to their second consecutive Conference USA title. These were the first back-to-back Conference USA titles for any FIU team.