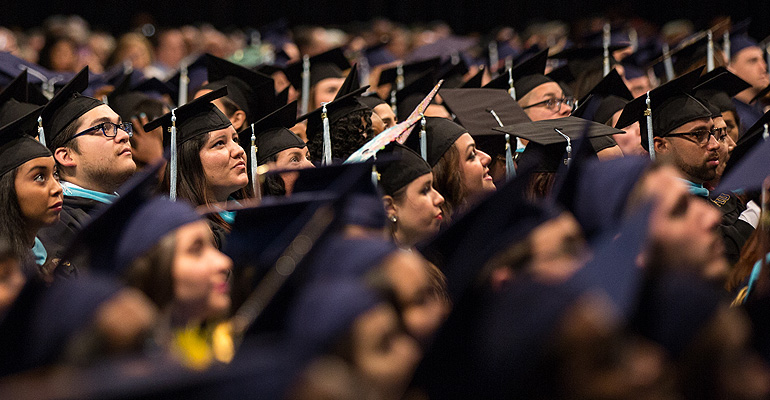 Born in Haiti, Alexandre moved to the U.S. at age 9 following his mother’s death, accompanied by his father and five siblings. His father worked two jobs and at age 12 Alexandre began working weekends, continuing this through middle school and most of high school.

Alexandre enrolled at FIU, studying full-time to earn his BBA in finance while also working full-time. He has been an involved member of ALPFA FIU, coordinating many projects, and also served as a member of Techgroup and Toastmasters @ FIU Business.

Alexandre hopes to pursue an MBA through Harvard Business School’s 2+2 Program, a deferred admission program for students who enroll after working two years.

Restrepo, who lives in Orlando, earned her master’s degree online at FIU while working as a senior business immigration paralegal.

She has volunteered with the National Farm Worker Ministry and as an elementary school tutor. She is a member of the Hispanic Bar Association of Central Florida. Restrepo was one of 20 students nationwide selected to participate in Microsoft’s Intellectual Property Law Institute.

Through the Hispanic Association of Colleges and Universities Alumni Connection Program, Restrepo has had two internships with the Court Services and Supervision Federal Agency in Washington, D.C.

In 2017 Restrepo will become a senior immigration and global mobility specialist for an engineering corporation.

After U.S. Marine Sergeant Stempien completed his honorable service to his country, including a deployment to the Western Pacific, he decided to complete a college degree he started many years ago before moving to Miami, where he met his wife, Raimy, an FIU alumna.

Stempien will be continuing his education at FIU working on his Master of Accounting degree and CPA certification.

When Toro was seven, he, his single mother and twin brother moved to Naples, Florida from their native Colombia. None of them spoke English and they didn’t know anyone in Naples.

Toro and his brother regularly stayed home alone in their rented rooms, while their mother cleaned houses, although she struggled to find work because she didn’t speak English.

Enrolling at FIU, Toro joined the International Business Honor Society (IBHS) and is the organization’s vice president. As the IBHS’ fundraising chair, he was one of the leaders of the group’s 2016 international service project to India. The group worked with a group of women to create a source of sustainable income through craft work. The students also taught basic English and math to small children and computer skills to older girls.

In 1980, when Santana was 11, her parents left Cuba with their two children, a grueling ordeal aboard an over-capacity shrimping boat. The family was among the 125,000 Cubans who made it to the U.S. during the exodus known as the Mariel boatlift.

Santana eventually enrolled at FIU, studied journalism and served as founding managing editor of The Beacon, the university newspaper. She was graduated and worked as a reporter for The Miami Herald and el Nuevo Herald.

Commencement, Mark B. Rosenberg, Worlds Ahead