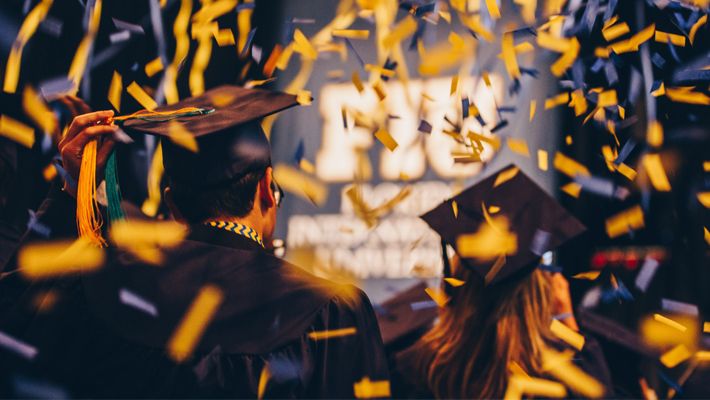 Two words can easily apply to each of the Spring College of Business “Worlds Ahead” graduates: drive and determination.

They have accomplished extraordinary things during their time at FIU — often against great odds. The 2018 Worlds Ahead graduates demonstrated strong leadership qualities, a desire to change lives and a record of going above and beyond in their studies.

Now, diplomas in hand, they’re ready to start their futures.

Entrepreneurship, now a driving force in her life, took Karley Chynces by surprise. One day she decided to attend a weekend StartUP FIU program. Karley remembers being one of the youngest students there – scared and not knowing what to expect.

At StartUP, Karley learned what a start-up is.

Determined to launch a business, she spent the next year praying for an idea, something that would positively impact a lot of people. She read books about how to start a business and practiced writing business plans, but she had no business to plan.

As she and her friends commiserated about college expenses and the need for spending money, Karley got an idea – an app where FIU students can buy or sell everything they use at school.

And so Etc. became a start-up.

Karley credits her membership in the American Marketing Association (AMA) at FIU with opening the door to entrepreneurship as well as driving her leadership skills.

Every time she heard about a competition or new opportunities Karley would sign up.

She describes falling into the world of entrepreneurship without even realizing it.

After graduation, Karley will devote herself to launching the Etc. app in the fall, as well as building and marketing the brand. She’s also going to work closely with FIU students, providing internships and job opportunities at Etc.

Gabriel Garcia was a boy when he and his family came to the United States as political refugees from Cuba’s communist regime, having endured persecution based on their political beliefs. Like many Cuban refugees before them, they began at the bottom of the economic ladder when they arrived.

Gabriel said his parents made big sacrifices for him and his siblings. Indeed, those difficult moments motivated him to succeed – first at G. Holmes Braddock High School as a Silver Knight nominee, Future Business Leader of America, and founder of an online Cuban genealogy group; and now at Florida International University as a prestigious Maldonado Global Scholar and executive board member for the International Business Honor Society.

It was through the honors society that Gabriel and eight of his peers founded a project in Bandhwari, India to help oppressed women learn how to become entrepreneurs and begin their climb out of poverty.

Gabriel believes that unique experience in India ultimately earned him a summer internship at Crowe Horwath, one of the top 10 accounting and consulting firms, and he will begin working for them full-time after graduation doing risk consulting work, particularly anti-money laundering and internal audits.

As a child of migrant parents, Noemi Reyes of Immokalee, Fla., spent her summer days in the blazing heat and her nights sleeping on cardboard vegetable boxes in small motels.

The constant traveling to find work, the dependence on the weather for pay and the long hours of picking soon had her dreaming of a better life. Noemi’s childhood experiences motivated her to make a change. This led her to finish high school, enter a college preparatory tutoring program, and eventually earn enough scholarship funding to attend FIU.

During her junior year, while speaking about her experiences at a fundraiser for the Immokalee Foundation, which is a nonprofit that helps the working poor in Immokalee, she caught the attention of Barbara and Dale Morrison. Dale is a board member of the InterContinental Hotels Group.

After a meeting and interview, Noemi obtained an internship in the downtown Miami hotel and continued to work part-time after her internship. She graduates this spring and hopes to one day join the Peace Corps to do youth development in a developing country.

Through military service and music, Shane Vega discovered his passions for leadership, creativity and giving back.

He enlisted in the Florida National Guard at the age of 17 and joined FIU ROTC in 2016. Shane rose through the ranks, earning greater responsibilities. He led the 2017 Mission Command Leadership Exercise, where he successfully took 120 cadets through a complicated and ultimately successful exercise.

He also organized the Ruck To Honor Veterans Day event at FIU, working with FIU Police and Miami-Dade firefighters to celebrate military service and honor the fallen. Shane’s character and accomplishments led to his selection as ROTC’s Battalion Commander, leading 200 cadets from several area colleges and universities.

For the past 10 years, music has been Shane’s source of strength, no matter what the circumstances. Shane, who plays trumpet, performed with the Studio Jazz Big Band on 88.9 FM WDNA on the FIU Spotlight hour and the Jazz at Jackson event at Jackson Memorial Hospital, and premiered pieces composed by FIU graduates with the FIU Wind Ensemble. He has also worked professionally with the Miami Symphony Orchestra, in Miami FC’s Street Band and the Miami Heat’s 305 Street Band. He is active in Student Veterans of America and Kappa Kappa Psi.

After graduation, Shane will continue his service as a Second Lieutenant Quartermaster Officer in the Florida National Guard. He plans to pursue a graduate degree and combine his military logistics experience with a career in civilian logistics and corporate management. 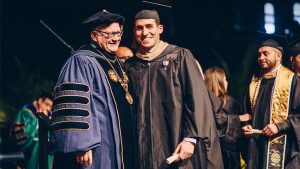