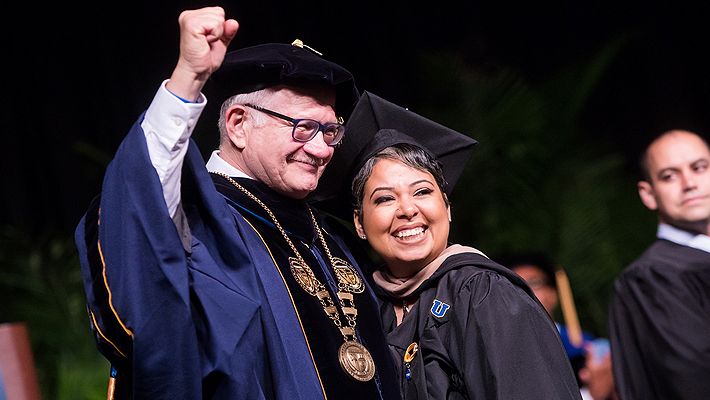 Five College of Business Worlds Ahead graduates who accomplished extraordinary things throughout their lives and during their time at the FIU — often overcoming life-altering challenges — were honored at the Summer 2018 Commencement ceremonies on July 29 and July 31, 2018.

“These students have shown they are Worlds Ahead by excelling in and outside the classroom,” FIU President Mark Rosenberg said during the ceremonies. “They have overcome challenges, demonstrated leadership, conducted groundbreaking research and academic work. They have changed lives.”

Diagnosed with multiple sclerosis in 2005 while living in her native New York City, Cristina Duverge went from working three jobs to barely being able to work at all. She lost her ability to walk in 2008.

Cristina saw education as the way forward, getting her associate degree and graduating from FIU with a double major in international relations and political science in 2015.

Nothing stops Cristina. Three years after getting her FIU bachelor’s degree, Cristina is graduating with her MBA. Says Cristina: “With MS, you have no control. These are the cards I’ve been dealt – so I say let’s play, and let’s play to win.”

In 2011, Aileen gave birth to triplets – Alejandra, Nicholas and Paola. During her pregnancy, Aileen suffered from preeclampsia, the condition that killed her sister.

Her premature daughters are on the autism spectrum and have learning delays.

With a full plate at work and home, Aileen continued to challenge herself to grow professionally. Last year, with the support of her husband, she took on the accelerated Master of Marketing program.

Ten months later, Aileen is graduating. She credits her fellow students for their support. In her professional and personal life, she lives by a simple philosophy: Move forward. Go one step at a time.

When Cindy Makita was 5, her sister Charlene saved her life donating the bone marrow that cured Cindy’s sickle cell anemia. The months of hospitalization in her native South Africa were the seed for her belief that one should make the most of every opportunity.

The Honors College graduate has served as president of the U.S. National Committee for UN Women Club at FIU and is founding vice president of FIU’s chapter of the National Society for Leadership and Success.

Cindy has become passionate about helping women economically and empowering girls. She wants to devote her time and talent to an international organization that will give her a chance to make a difference in their lives.

Guillianny Rebolledo wanted a really delicious frozen treat, so she invented one. Guillianny and a business partner established Yummii last year, and now they are selling their healthy, organic iced fruit bars at Hollywood’s Yellow Green Farmers Market and providing them to private and corporate events.

The international business and management major expects to grow that business, while beginning graduate school in the fall.

Her family, including 3-year-old son, Adrian, is her inspiration and the reason she enrolled in the Professional Bachelor of Business Administration program. As he grows up, she said, she can see first-hand how far hard work, determination and education can take someone.

Santiago Bolivar immigrated to the United States from his native Colombia when he was 14 years old. When the 2008 recession hit, the family lost everything they had worked for — the cars were repossessed, the house went into foreclosure, and a church provided their food.

Santiago found a job as a part-time bank teller and kept getting promotions. After 10 years, he is now a vice president and small business banker for Bank of America in Broward County.

Over the past 10 years he has been working on a bachelor’s degree, as his life commitments allowed, and is graduating with honors. Santiago wants everyone to know that nothing is impossible.