This week the currency markets were in a stir once again. Volatility rose as global market worries continued to be a concern, specifically debt issues in Europe. The Yen was the key gainer this week, as investors tend to flock to Japanese and U.S. currencies as safe haven assets.  Along with the rise in the yen, came reductions of riskier assets such as Euros and international debt and equity. One key driver that led to the continued selling of Euros this week was an interview with Pierre Cailleteau, Moody’s Chief International Economic and Financial Policy Analyst. In an interview on Thursday by Bloomberg Asia, he mentioned concerns about Greece’s domestic opposition of necessary budget cuts. He then spoke of another possible down grade if Moody’s doesn’t see any fundamental change over the next few months. Moody’s currently has the highest rating on Greece in comparison to S&P and Fitch, and so the next cut on Greece’s credit profile could possibly be more than one notch.

At the Euromoney Conference in London, Carl Heinz Daube, head of Germany’s debt agency expressed serious concern for the Euro.

“The bankruptcy of a euro-region country or a nation’s exit from the bloc would spell the end of European monetary union…If one member were to go bankrupt this would mean, after 10 years, the euro experiment is at its end…a collapse of the whole system.” 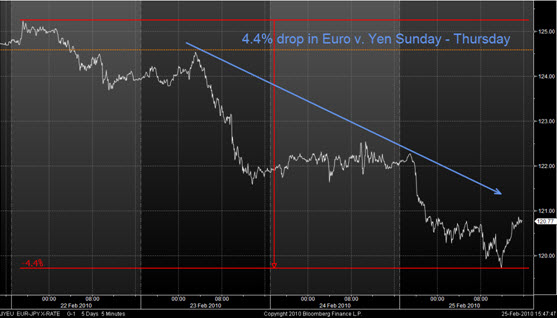 On the 23rd and 25th of February, most of the Euro selling was done over night during Asian and European market hours. As traders discussed the reasons for the flock to the Yen, many suggested it began with worried Euro holders who began the selling. This soon became a “rock that wouldn’t stop rolling” as major technical levels were broken and stop loss orders kept the pair on a free fall. The heavy stop loss triggers are said to be major holdings by institutional carry trades. A carry trade is done when the investor sells one currency to finance another and collect overnight interest on the currency that they bought. The idea is to finance it by selling a currency with a low interest rate, in this case, the Japanese Yen. However, worries across the globe have been working against the carry trade; as the Yen has gained about 8.5% year to date being the safe currency that it is known to be. This ruins the carry trade as investors in the trade are short then Yen, losing capital as it rises. Overall, with Euro debt issues still very much a concern and U.S. unemployment not showing much weakness, the currency market should be one to watch in the near term.

It has been a busy week on Capitol Hill. The congressional hearing on the Toyota malfunctions, health care summit and Chairman Bernanke’s testimony may have left many congressmen much too preoccupied to notice the significant shift in the economy’s momentum. Many of these figures shed a substantial amount of doubt on the direction that our economy is heading and the sustainability of a strong recovery and should be examined.

Both initial and continuing jobless claims came in worse than expected. Initial jobless claims shot up from 473K claims to 496K claims and Continuing Claims rose from 4570K to 4617K. Both of these indicators have seen increases over the course of their last two reporting periods.  A rise in both indicators is particularly troublesome and carries serious implications for the unemployment rate set to come out Friday.  Although both indicators peaked in March of 2009 and have been in a downtrend ever since, both indicators are still at elevated levels and seem to be having difficulty continuing downward.

February has seen a steep drop in Consumer Confidence.  The University of Michigan reported a decrease in Consumer Sentiment earlier this month. Thursday Consumer Confidence, as reported by the Conference Board, saw a substantial decrease as well. The Conference Board’s confidence indicator records the proportion of positive responses to negative responses received when consumers are questioned about current economic conditions. This indicator is taken monthly and is widely believed to be indicative of consumers’ willingness to spend.

New Home sales figures for January came in on Wednesday and showed a substantial decrease in the average sales of new one-family homes (from 342K to 309k). Some analysts believe that demand for new homes is being eclipsed by existing home sales. The indicator that measures existing home sales in January is set to come out Friday and the mean of all Bloomberg estimates is an increase from 5.45M to 5.49M. New home sales are scrutinized routinely because of their impact on the construction industry (namely the creation of new construction jobs) and tend to be an indicator of economic expansion and contraction.

This week, the U.S. securities regulators have affirmed a new rule in order to curtail the process of short selling in the stock market. This new rule, which was designed to put the brakes on short selling, was approved by a 3-2 vote by the Securities and Exchange Commission on Wednesday.

Under the SEC’s rule, if a stock fell by more than 10% in a day, a curb would kick in, restricting any short-selling of the stock for the rest of the trading session and the next day.

Normally, short-sellers bet on a stock’s decline. In a short-sale, an investor borrows stock from a third party and sells it to another trader in the hope that its price will drop. When the prices do drop, the seller profits by buying back the stock at the lower price and then returning the borrowed shares to the original owner.

The SEC has been concerned about the mounting downward pressure, accompanied by the fear of predatory short selling which may be able to destabilize markets and undermine investor confidence, even though the commission was perceptive of the benefits that short selling could provide to the markets. Thereupon, after more than a year since the financial crisis, U.S. securities regulators adopted this direction in an effort to contain the provoked cries against short selling and to rein in investors who bet on a stock’s decline.

Consequently, it seems that this new “circuit breaker “rule attempts to bridge the divide between those who argued a market wide curb was needed to protect stocks from short sellers and others who said that restrictions would hurt market liquidity. It is indubitably a good start; however, the regulators must stick on to being aggressive in the long run.

On Wednesday, February 24, 2010, Ben Bernanke stated that the U.S economy still needs record-low interest rates for several months because the recovery is likely to be slow, reiterating last week’s increase in the discount rate will not cause borrowing costs for consumers and companies anytime soon. Over the next couple of years, the jobs market should remain weak and inflation subdued, Bernanke said.

Although the U.S economy grew sharply at the end of 2009 due to a surge in inventories, consumer spending should remain constrained by weak employment. The Fed forecasts the economy to grow between 3.0% and 3.5% this year and between 3.5% and 4.5% in 2011 with the unemployment rate falling only to 7% by the end of 2012. Consumer prices, net of volatile energy and food items, dropped at the start of 2010 for the first time since 1982 – a sign of weakness for the economy.

While long-term inflation expectations have also remained stable, Bernanke stated that the central bank is prepared to tighten credit when the time comes to prevent inflation. The process of tightening credit would involve, firstly, the lessening of the more than $1.0 trillion in excess reserves that banks had accumulated after the central bank bought mortgage-backed securities and U.S Treasuries as a means to assuage the financial crisis.

The Fed also stated its readiness to be more transparent but stressed the importance of being independent from politics. For instance, Bernanke stated that the Fed would consent to a review of its management of the emergency lending facilities during the crisis. However, its interest rate decision should be insulated from short-term political pressures, said the Fed chairman. In addition, Chairman Ben Bernanke expressed his most aggressive defenses of the central bank’s role in the future of bank supervision. He firmly restated the need for strong consolidated supervision of large complex financial firms that pose threats the stability of the financial system.  As declared by Bernanke, the Federal Reserve has a higher capability to understand financial markets, payment systems, economics, and a wide range of areas other than bank supervision than do bank supervisors. In addition, the Chairman reiterated the need to address the issue of systemic risk.

On another note, Bernanke strongly suggested that the government-sponsored firms, Fannie Mae and Freddie Mac, be privatized. The Chairman did not give a specific framework in doing so.