The ISM manufacturing number came in at 59.6 and was better than estimated; indicating that the manufacturing industry is exhibiting increased productivity. Analysts expected an Increase from 56.5 to 57 but were surprised with the large jump the index made. Benjamin Tal, a senior economist at CIBC World commented: 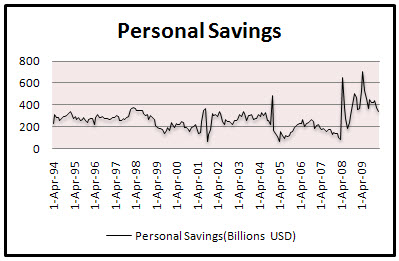 “Manufacturing is improving and will continue to improve. In fact, you have seen a huge increasing in this index and I would not be surprised we’ll get another big number today. However, go a little bit deeper and you see that it’s all capital intensive.”

In the same interview on Bloomberg Radio, Benjamin Tal went on to explain that while productivity in the United States is increasing, it is not a labor- intensive recovery. He explained that large companies with access to financing are buying more equipment and will have their current employees work longer hours before they begin hiring again. The result has been an increase in productivity coupled with an emergence of forced self-employment in the labor market.

Not everything said was pessimistic. He argued that since the United States is deleveraging and feeling the pain of the recession now, it will be poised for growth in 2 to 3 years. Europe and Canada on the other hand, are postponing the deleveraging of their economies and may feel the pain in the future. He pointed to the increase in personal savings and the decrease in the debt-to- income ratio in the private sector of the United States as evidence.

Global Markets: Asian Stocks off to a Good Start in Q2

Asian stocks made a solid start to the second quarter on Thursday inching closer to two-month highs as China’s manufacturing sector picked up and foreign buying boosted tech shares in Taiwan and South Korea. Japan’s Nikkei 225 hit an 18-month high on Thursday as the Yen’s declining trend boosted Japanese exporters and traders forecast more gains in the new quarter. It closed up 1.4% at 11090.The dollar was down 0.1 percent against the Yen after earlier rising to a 3-month high of 93.65 Yen.

Hyundai Motor advanced more than 5% after it flagged it could post record U.S. sales in March. Moreover, all eyes are on Dai-Ichi Life, which will begin regular trade on Friday. The stock debuted at 160,000 Yen, or 14% above its offer price, in the world’s biggest IPO in two years.

Last but not least, markets in Southeast Asia mirrored strong gains seen elsewhere in the region. Singapore’s STI closed up nearly 2% at 2887.46 while markets in Malaysia close up .7% at 1320.57. Furthermore, strong foreign buying lifted stock markets in this region’s two biggest economies. Thailand’s benchmark stock market index .SETI hit a 21-month high while Indonesia’s benchmark index .JKSE was up 1.2 percent within sight of the record high hit on Jan. 14, 2008.

In Australia, shares climbed to finish 0.7% higher as M&A activity supported sentiment. Materials also received a boost from M&A activity in Australia’s sizzling commodities sector. Australia’s Lihir Gold (LGL.AX) rocketed 33.3%, after rejecting a US$8.5 billion takeover offer from the country’s top gold miner, Newcrest Mining’s (NCM.AX) which also rose 2.9%. Lihir stated that the offer did not fully reflect the company’s growth prospects. The deal followed a bid on Wednesday for Macarthur Coal (MCC.AX) which rose 5.84% from Peabody Energy (BTU.N), which was also rejected.

This Wednesday, President Barak Obama spoke at Andrews Air Force Base to address the issues of domestic energy. He touched on the governments clean energy investments in batteries, a smarter grid, renewables, mileage standards, and hybrid vehicles. This was of course before he brought up what many were surprised to hear – the opening of drilling for oil off U.S. coasts. The basis for the urge to drill is that although the administration has the long term goal of switching to clean renewable sources of energy, they understand that there are near term issues. Given the Unites State’s current energy needs, we need to “harness traditional fuels, even as we ramp up renewables.”

The President made the connection with sustaining economic growth, producing jobs, keeping businesses competitive, and our country secure. The President continued by emphasizing that drilling alone cannot meet our long term energy needs, and emphasized the importance of not giving up on carbon control and the other energy regulations. The program will allow drilling in the mid and south Atlantic, Gulf of Mexico, and North Alaskan coast.

Overall, the energy sector has been a laggard of the market, underperforming the S&P 500 since the March lows. However the recent news in drilling, breakout of oil prices, and stabilizing Euro, has pushed traders and investors into the forgotten sector. The XLI Select Spider ETF that tracks the energy sector has gained 4.4% as of Thursday for the week. 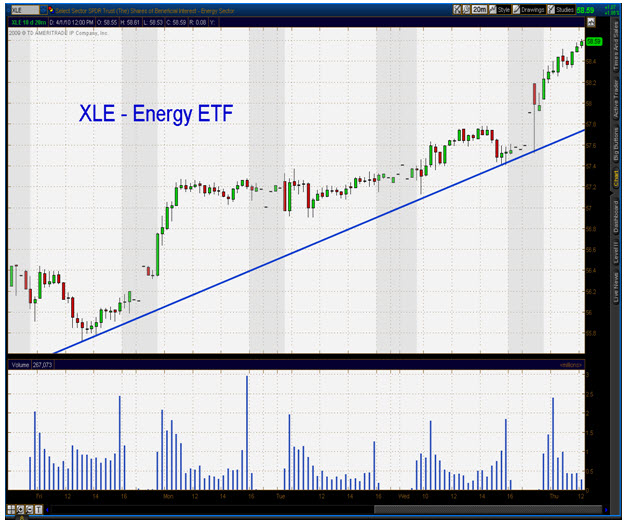 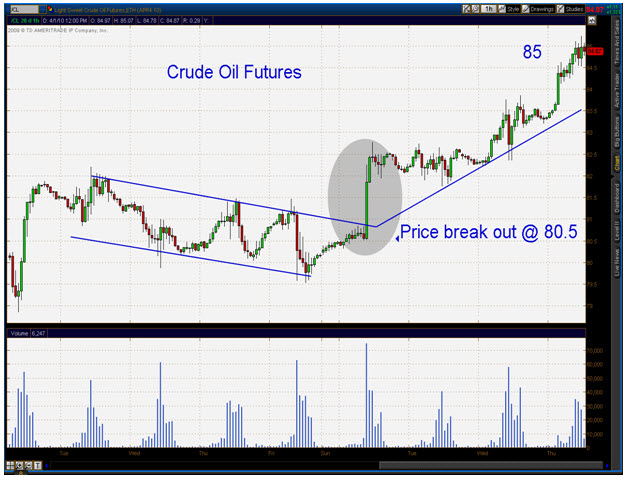